Understand the differences between native and hybrid apps, crack the endless app development debate, and select the best approach for your project.

Quick Summary :- Users want fast and secure apps with a healthy dose of personalization. That’s what businesses must aim to create! This article evaluates how native and hybrid development differs in providing user experience, performance, speed to market, and so on.

Even though it is over a decade now, the debate of “native vs hybrid app” is still ongoing, still intriguing. As a matter of fact, native and hybrid mobile application development approaches have their own share of strengths and limitations, like any other technology.

The annual app download worldwide is projected to reach 299 billion in 2023. These numbers indicate that the businesses have plenty of opportunities and competition both. Of course, one can’t help but scratch their heads when apps like Facebook and Whatsapp are native, while applications like Instagram and Evernote, which people treasure, are hybrid. But, ultimately, the selection comes down to several critical factors such as your budget, time constraints, complexity in features, security requirements, and so on.

Read on to learn the differences between hybrid and native apps and make an informed decision for your next app development project.

An overview of native app development

Native applications are built using specific programming languages that support one particular operating system at a time. For instance, Objective C or Swift are used for iOS, while Java or Kotlin are used for Android.

Both Apple and Google provide app developers with their own interface elements, SDK, and development tools. Native apps can access a phone’s various devices like its camera and address book. The user interface components, logic, styling, and data are all stored on the device for most native apps, making them more suitable for offline working. 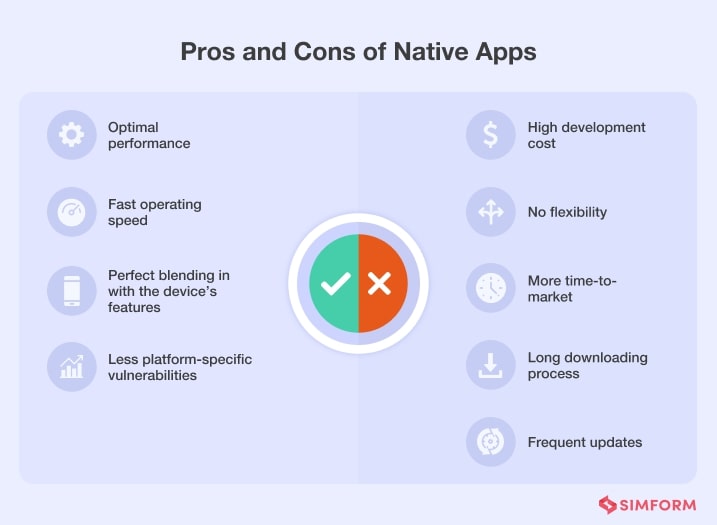 A general perception until a few years back was almost one-sided in favor of native app development. Yes, native apps shine for many businesses, but not for all! Now, with changes in time and technology, hybrid apps compete toe-to-toe with native applications. We’ll discuss it more later. But, first, let’s see some popular examples of native apps.

Video games are primarily written for top-of-the-line consoles, so most of them are native mobile apps.

Pokémon Go: This game efficiently accesses the device’s functionalities—the camera for augmented reality, GPS for mapping locations, and the accelerometer to measure acceleration.

An overview of hybrid app development

Hybrid apps are developed using one single code base to run across multiple channels and platforms. These apps are written in JavaScript or HTML5 and built using cross-platform frameworks such as React, Sencha, Xamarin, Ionic, etc.

A hybrid application is deployed in a native container and uses a mobile WebView object. These apps are part native, part web apps, and hence, users can download from app stores and also access them via a web browser. This approach is widely applicable to the travel industry and businesses that focus on products, photo-sharing, reviews, and customer ratings. 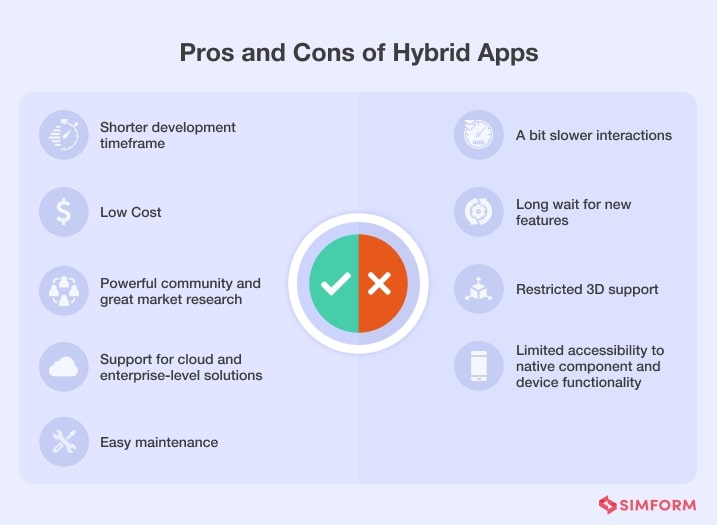 Nowadays, hybrid apps are often predicted to trump native apps. However, some functionalities are not available for hybrid apps when the user doesn’t have a stable internet connection.

Though native apps are known for their “faster” performance, hybrid apps like Uber, Instagram can hardly be called slow or lagging in performance. So we can say that there is a minute difference in the performance of these apps at a high level.

Without knowing how one app development technique differs from the other, it is challenging to move forward and decide the most suitable approach for your mobile application project. Here we compare ‘native vs hybrid’ based on the crucial deciding factors for understanding the characteristics, the core strengths, challenges, and potential pitfalls.

Selection of the right technology stack—a combination of programming languages, tools, and software—improves your app’s performance and supports its growth prospects. On the other hand, the wrong choice increases the application’s development cost and raises some fundamental issues.

Simform, for one, offers ​​dedicated development teams to select the appropriate tech stack and understand the business requirements for choosing the suitable development model. We believe that the right blend of tech stacks and experience is a must for delivering expected outcomes. 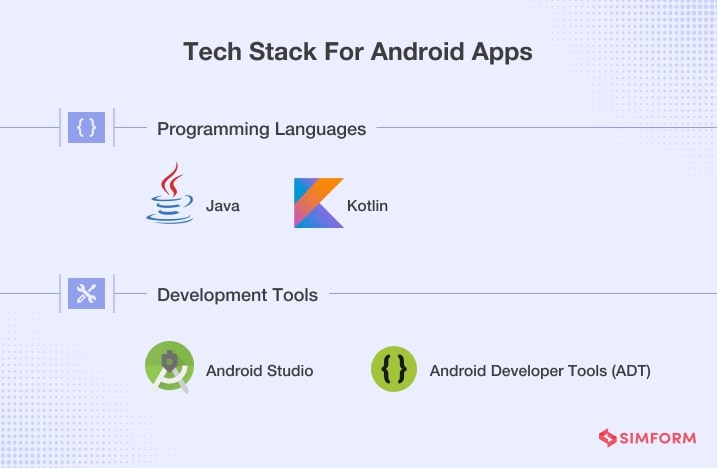 As stated earlier, the two main programming languages used for Android apps are: Java and Kotlin.

Java is based on Android APIs and offers comprehensive open-source tools and libraries to developers. However, certain limitations within Java can obstruct Android API design.

Kotlin was particularly designed to offer solutions to API design deficiencies and improve existing Java models. Besides, it is more stable and saves approximately 30% of code space than Java.

For development tools, you can use—

The two primary programming languages used for iOS apps are: Objective-C and Swift.

Objective-C is the original language used in building the iOS app, and Apple still facilitates its support. It also provides object-oriented caliber and a dynamic runtime environment. However, it’s much more complex, and developers are susceptible to more errors.

Swift is preferred for its simplicity, reliability, and speed. It is easier to learn, edit, and debug. Plus, it requires fewer lines of code.  In addition, the absence of string identifiers leads to fewer mistakes.

For example, WayPoint wanted to have a clutter-free digital platform to create events and invite artists and attendees. So, our team at Simform built an iOS app using Swift and an Android app using Kotlin. This way, we could leverage native features like Bluetooth, compass, GPS, etc., to provide a seamless user experience.

For development tools, you can use—

Xcode: the official development tool powered by Apple – includes everything a developer might need to build great apps for Apple devices. It provides a unified workflow for UI design, coding, testing, and debugging. The Xcode IDE combined with the Swift gives stunning results.

Appcode: An open-source alternative to Xcode, Appcode is a smart integrated development environment that supports Swift, C/C++, Objective-C/C++, etc., via plugins. Despite allowing optimum productivity by a flexible setting system, it lacks the features of XCode and is still dependent on the latter to an extent.

Various hybrid app frameworks have surfaced over the last few years to meet the growing demand for hybrid apps. 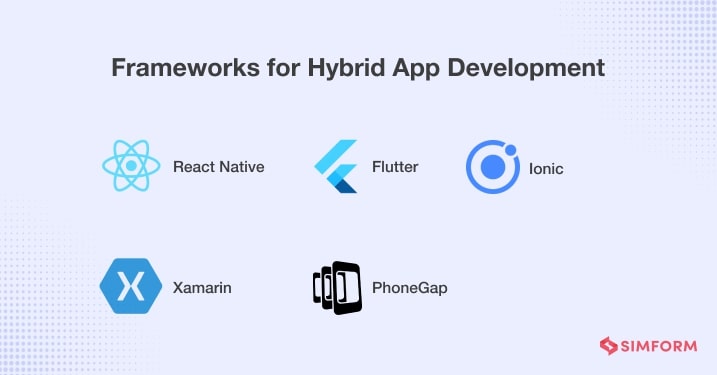 Here are some of the feature-rich and user-friendly frameworks—

CrayPay, for one, aimed to make mobile a standard mode of payment in retail stores and wanted to develop an app that worked on multiple platforms. But, unfortunately, it already had an app that had some glitches and was not serving the purpose. And so, we at Simform picked Flutter as a framework that was simple to set up and allowed easy and smooth fixes. Now, Craypay is a hugely successful app for the quick processing of mobile transactions.

Ionic: a complete open-source SDK – AngularJS-based framework – is powered by a huge worldwide community. Ionic is comparatively easy to learn, has a simple UI, and offers over 120 native device features like HealthKit, Bluetooth, FingerPrint Auth, and more with TypeScript extensions and Cordova/PhoneGap plugins.

Check out the comparison of Flutter vs Ionic based on app architecture, size, performance, UX, and other factors.

The average app development time is between 20 hours to 200 hours, and the cost ranges from $1,000 to $10,000 or even higher. Therefore, when investing a significant amount of money, it is essential to have a team of competent mobile app developers with a distinct mental aptitude to enhance their technical skills to shape your dream.

Visually, while comparing the end-products, it’s pretty challenging to tell the differences between native and hybrid apps. While performance, user experience, and robustness are native apps’ perks, hybrid apps are celebrated for fast turnarounds and compatibility across different platforms. Here’s the checklist to tick before you decide about going all-in for Native or Hybrid app development, and we hope it helps you make an informed decision.