Monoliths vs Microservices: Which is Right for Your Application?

Monoliths vs microservices is a straightforward debate if you compare the right parameters. Read on to discover all the key factors worth your consideration.

Quick Summary :- While the microservices architecture has always been dubbed the more advanced and superior in the monoliths vs microservices debate, it isn't always the case. Both architecture patterns bring specific set of benefits of table. In this article, we bring to you an objective comparison between the two, backed by stats and facts, to help you determine the more apt app architecture for your business.

Monoliths vs Microservices: Which is Right for Your Application?

“It was getting increasingly difficult for us to make changes in the codebase. New features would take an eternity to go live. The deployment pipeline was choked to its limit…… and that’s when we decided to move to microservices”

-Every spokesperson at every microservices migration talk ever

It feels like listening to the same record over and over again when going through microservices migration case studies. But there’s a good reason they all sound the same- it is extremely difficult to scale with monoliths, and microservices are excellent at it.

In this blog, we’ll give you a comprehensive monolith vs microservices comparison. It will go through all the critical parameters affecting app success along with the use case. By the end, you’ll be able to objectively decide which architecture would suit your application better.

At Simform, we make your business more profitable by using our microservices consultation and development expertise to build scalable and reliable software. Contact us to get in touch with our expert solution architects.

What is monolithic architecture?

Monolithic architecture puts all the functionalities of the software into a single codebase. The codebase, usually, is internally divided into layers, namely the presentation layer, business logic layer, and database layer. This codebase, consisting of layers, is then deployed as a single jar/war file.

This encapsulation of modules within a single codebase results in a tightly coupled architecture. It leads to a specific set of advantages and disadvantages that we’ll discuss in subsequent sections, along with the ideal use cases.

What is microservices architecture?

In the case of microservices architecture, functionalities and business capabilities are broken down into individual modules called microservices. Each microservice has its own database, communicates with other microservices through API endpoints and HTTP protocols, and can be developed independently.

With separate databases for individual microservice, duplication of data is a common occurrence. However, the loose coupling of modules brings about a lot of operational flexibility for teams and individual developers.

Both monolithic and microservice architectures do well under certain circumstances. But before we get into the detailed comparison, let’s have a quick look at their pros and cons. 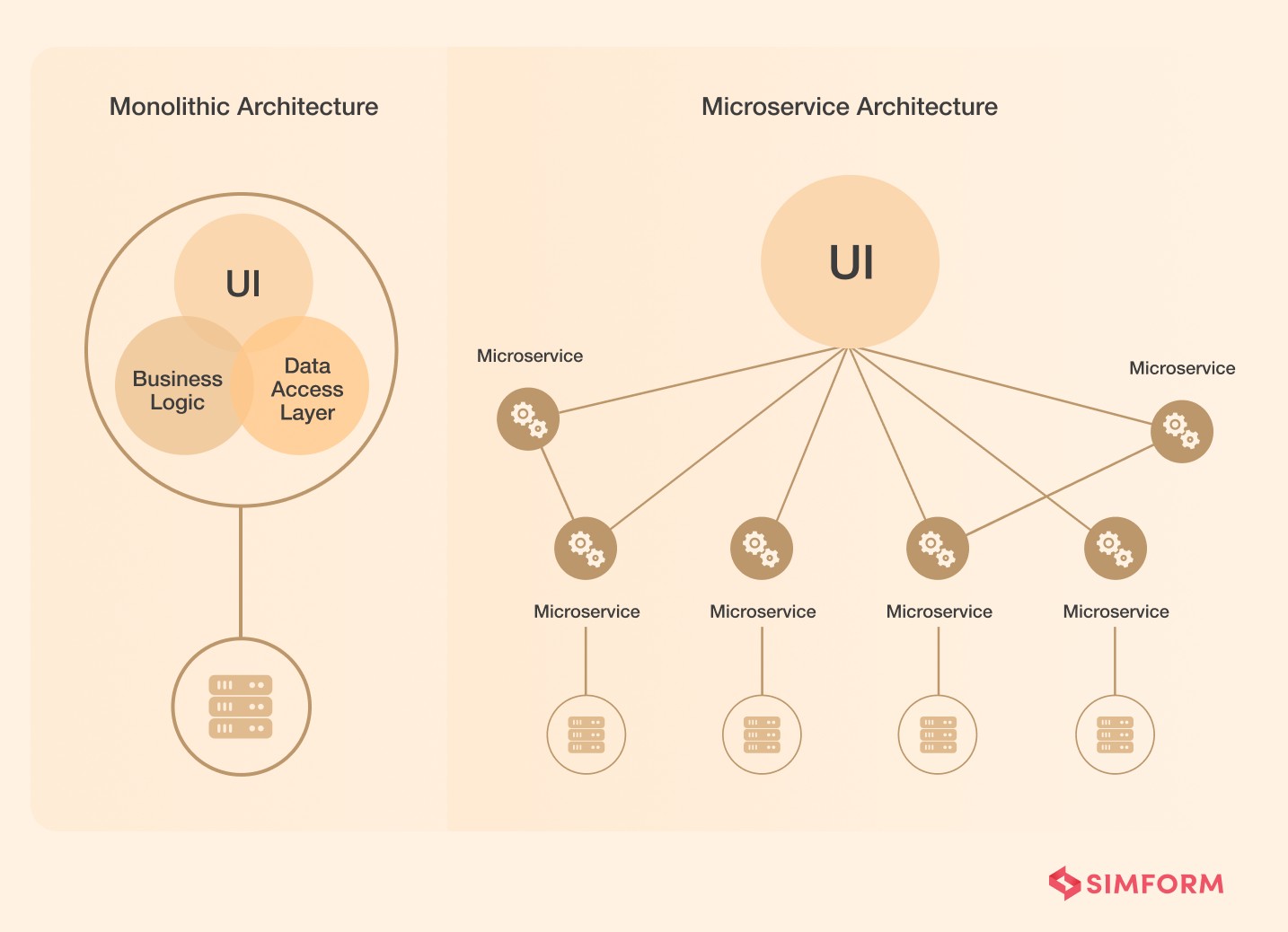 Monoliths vs microservices: Pros and cons

How is microservice architecture making a difference in various business sectors?

Monoliths vs microservices: An objective comparison of the two software architectures

There are multiple ways to measure performance. And then, even the conditions would determine which architecture does a better job. To even out things, we are going to discuss the performance, based purely on latency. Subsequently, it translates to load speeds and other parameters affecting end-user experiences.

The microservices architecture involves a constant exchange of information between various services. Each communication call comes with certain latency, which is the time taken for the information to get relayed from point A to point B. The individual latencies add up with multiple communication channels between various services. Under ideal conditions, the communication calls take place in parallel, and the net latency would be equal to that of the process with the highest latency.

In the case of monoliths, the communication calls are local. This leads to considerably lower latencies and thus improved performance. 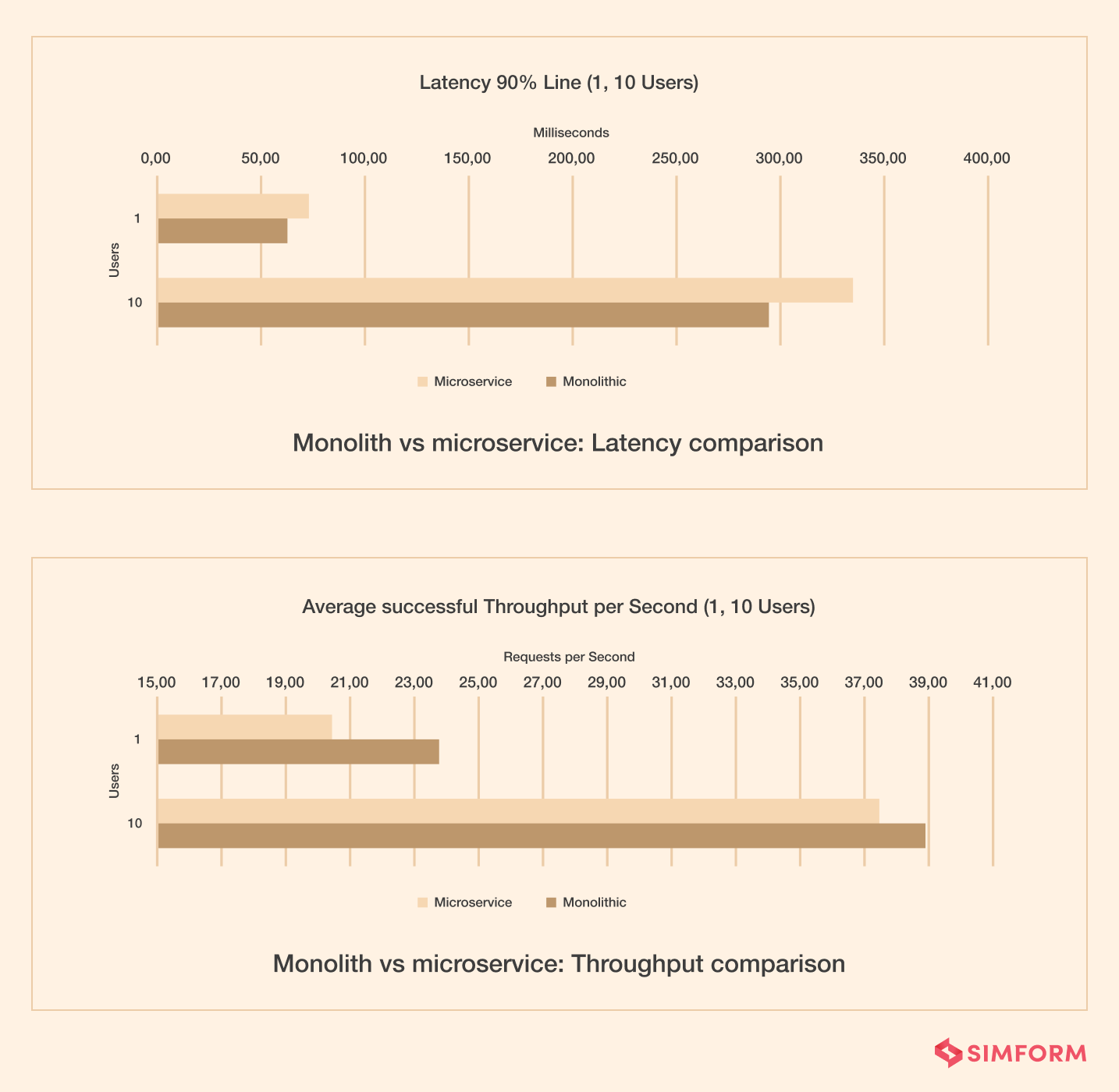 The above graph is a result obtained after measuring performance between monoliths and microservices. The results shown are for a complete system consisting of the user interface, REST API, business logic, and database. In the case of the microservices architecture, it was split into four microservices, each running on a separate Docker container. On the other hand, the monolithic application was divided into three parts- UI, application, and the database. And all three of these ran directly on a machine.

It clearly shows that microservices are 14% and 12% slower than monoliths for the two use cases. And similar results are echoed by experiments comparing the performances of the two architectures.

So when performance is based purely on latency, monoliths outshine microservices. However, you should also keep in mind that we are talking about fractions of seconds here. There’s so much more to successful applications.

When speaking of complexity, it covers the complexity of development as well as maintaining the existing software.

Let’s start with the microservices architecture. With each new service coming into the picture, a microservices environment can grow exponentially. Each microservice has its own codebase. There are multiple frameworks in action and potentially multiple languages being used to build the application. This is accompanied by the use of multiple versions of libraries since the releases are not in sync.

While these were the complexities involved during development, running a microservices application is no simple feat either. Containers and clusters come with complexities and demand great expertise for smooth management.

Monolithic applications, on the other hand, are relatively simple to develop. There’s only a single codebase with one library. Even running a monolithic application is simple up to a certain scale. It’s easier for developers to keep track of everything. 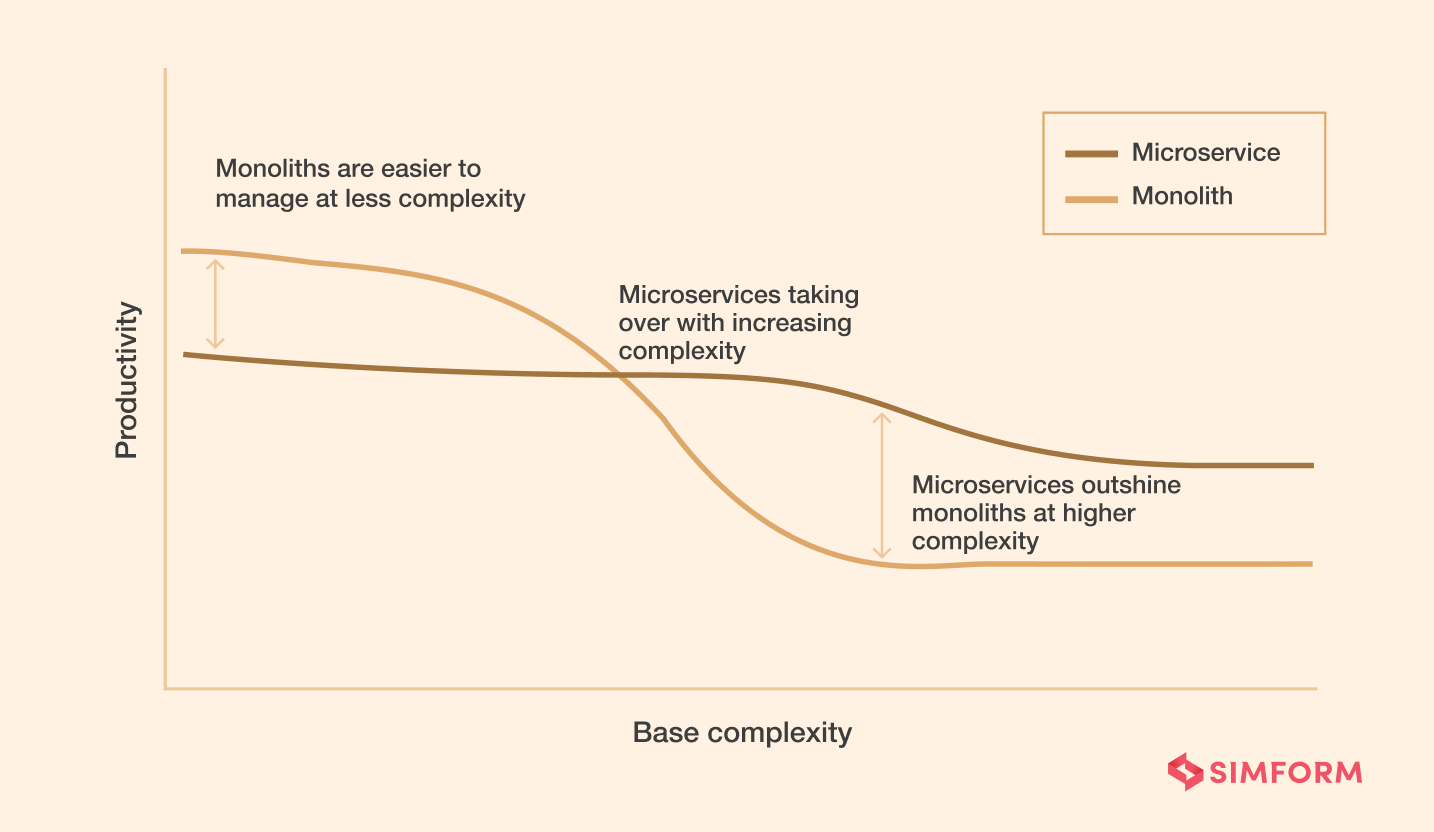 However, at large scales, things turn upside down. Legacy applications grow up to millions of lines of codes, and such entities can never be easier to manage. Most stories of successful migrations from monoliths to microservices started from monoliths becoming ridiculously difficult to manage and maintain.

Testing is easier in the case of monoliths. There is only one codebase to go through and track while testing and debugging. While if we talk of the microservices architecture, comprehensive testing is always a challenge.

Not only are you supposed to test out each microservice individually, but you also need to pay great attention to the testing of inter-microservice interaction. Business flows usually go through multiple microservices, and QA teams need to cover all the possible interaction scenarios.

Take a video-on-demand application under monolithic as well as microservices application architecture. Not only does the number of individual services increase in the case of microservices, but there are even more integrations and dependencies to test out. 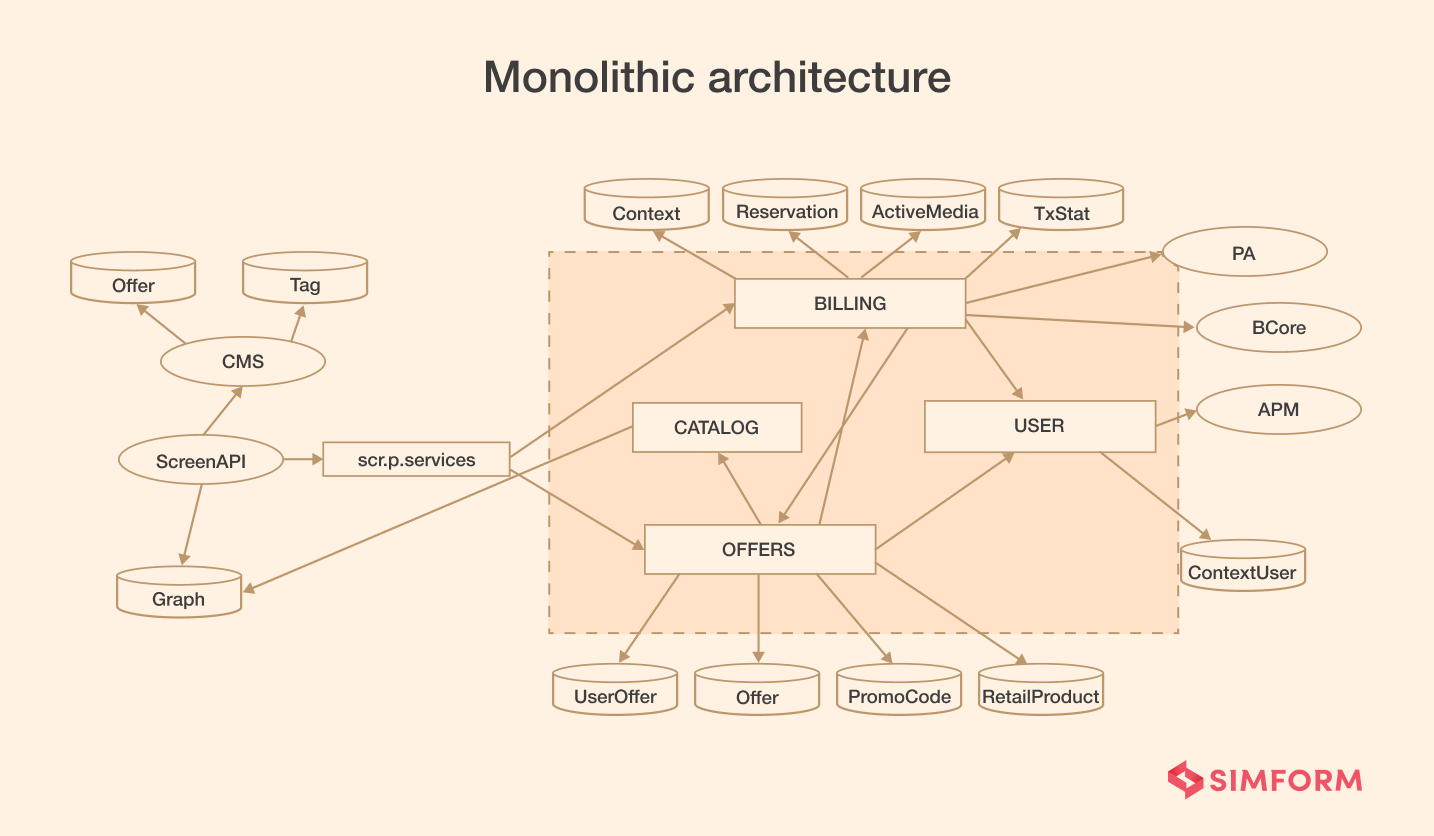 It might happen that, let’s say, services X, Y, Z pass all the tests at the individual level, but the business operation involving all three isn’t running. You might have to coordinate with all three teams to make changes and roll out updates for seamless operation. And that is much easier said than done. 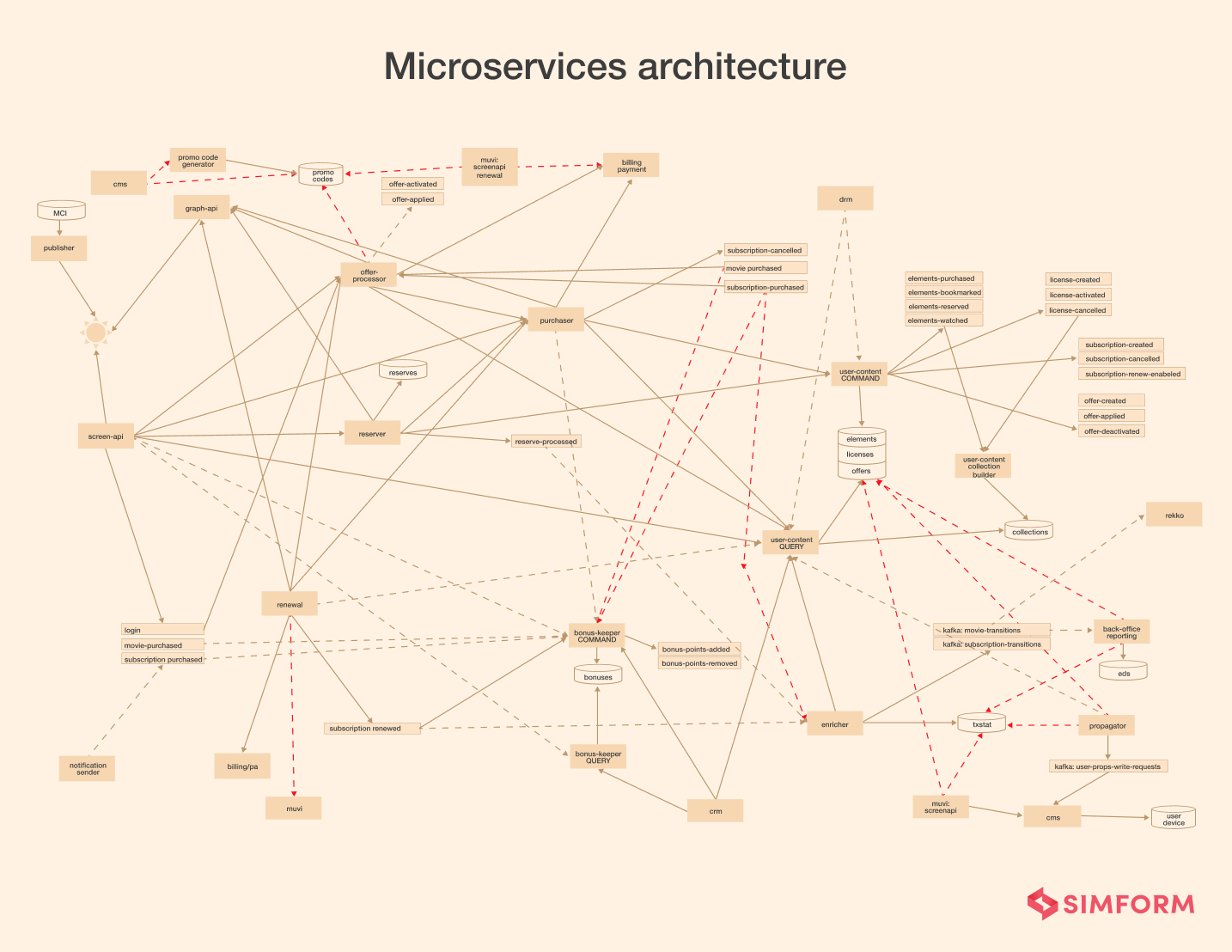 Based on the scale of services, microservices can present a lot of challenges when it comes to testing. Skilled QA engineers and intelligent automation are critical for microservices testing. And all of that comes with additional costs and resources.

However, microservices also come with the cushion of failure isolation. If some things go down, it’s less likely that the entire application will go down. However, in the case of monolithic applications, there are multiple potential single points of failure.

So even though microservices are more reliable, testing is easier in the case of monoliths.

In the rapidly evolving digital ecosystem, the quicker you can move from an executive business decision to a product release, the better chances of success you have.

One of the biggest reasons behind the immense popularity of microservices is the short time to market. The decoupled architecture makes it very easy to continuously roll out new features and upgrade the existing ones.

For instance, one of our clients had a legacy learning management system for school districts and wanted to undergo modernization. We used the microservices architecture to rehaul and rebuild the entire application in 12 months. While the decoupled nature of microservices facilitated the revamp, it has also enabled them to launch new features in a quick turnaround time.

It is at the back of this microservices infrastructure that they can now absorb feedback from pupils and parents to roll out new functionalities in no time. The architecture also supported seamless integration with 50+ systems which, in turn, helped build a dynamic and reliable analytics platform.

Individual microservices, being small entities, are easier to develop and update. It means developers can quickly build a microservice around a business capability and roll it out for users to try.

In the case of monoliths, every subsequent change can get difficult depending on the scale of application. It is a good idea to go monolith in the case of MVP, but full-fledged applications over this architecture are always going to come with high time-to-market.

Team structures under conventional monolithic and microservices architectures are different. Under the microservices arrangement, you have smaller teams working on individual services and holding complete accountability for the same.

Whereas in the case of monoliths, there are generally large teams with multiple devs contributing to the same codebase but no one taking ownership of the entire build. Another issue of such a team structure is inefficient communication.

Since there are so many involved and almost everyone’s work is affecting everyone else, it’s extremely difficult to find synergy among the entire team. On top of that, where there are production and operation silos in monolithic organizations, poor communication brings down the quality of the entire software. 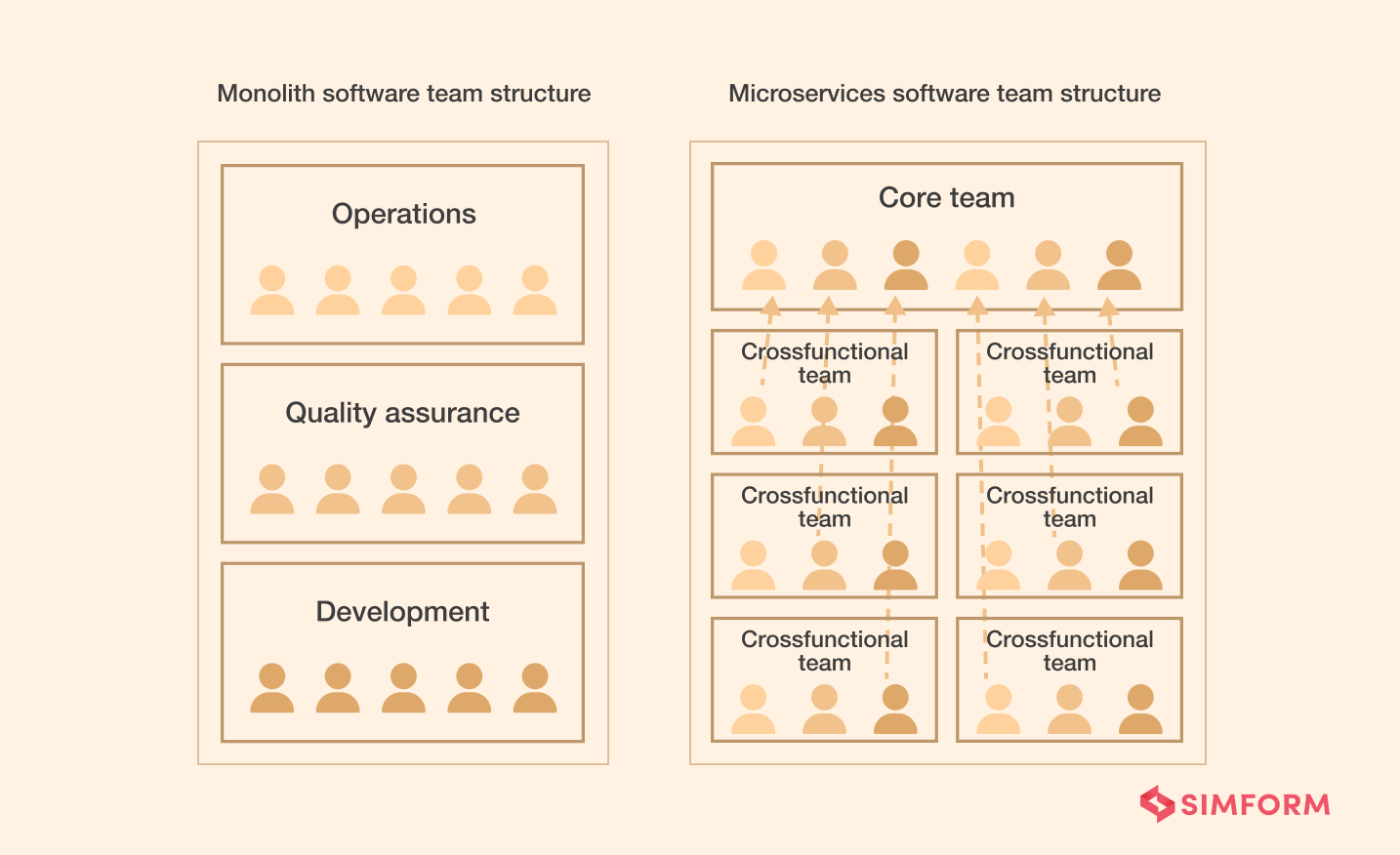 The microservices team usually comprises everyone from operations experts to quality engineers. This leads to faster builds, instant communication, and quick turnarounds. Additionally, the tech agnostic nature of microservices allows you to hire just the right kind of experts for the team. You don’t find yourself struggling to find RoR devs just because that’s what you chose at the beginning. If it’s easier for you to get Python developers, microservices can let you build the next feature using that only.

With microservices, it’s much easier and natural to follow the DevOps principles and maintain an agile SDLC.

How Microservices are Transforming Industries: Use Cases from Capital One, Facebook, Uber, and more

Monoliths vs microservices: When to use

Now that you know the characteristics of both the architectures, the next obvious question – When to use which one? Here are a few broader use cases for both architectures. 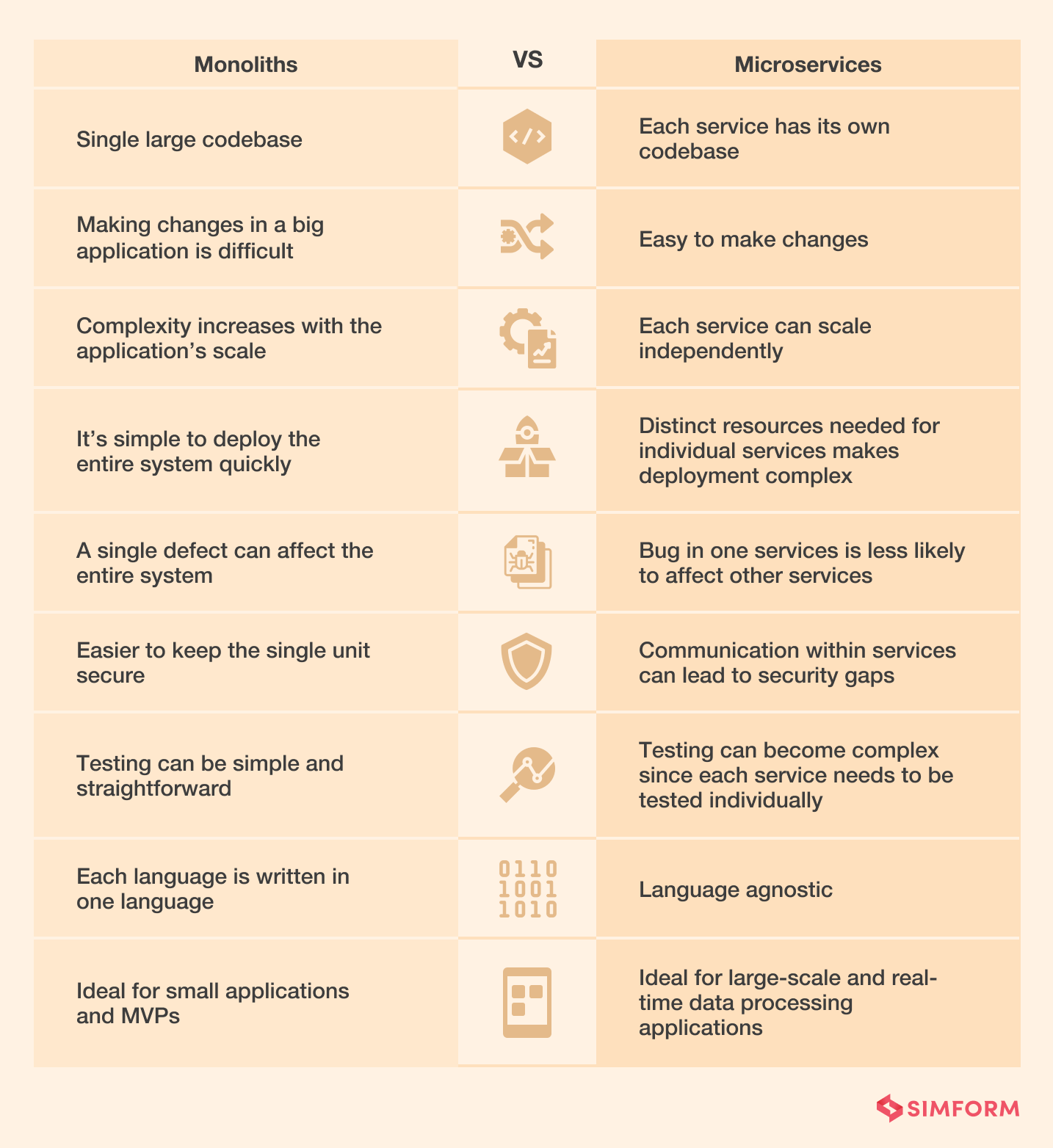 Monoliths vs microservices: How to choose the right architecture for your application

Despite the many advantages and disadvantages of these two architecture patterns, your biggest concern would be to identify the right one for your application. Well, there are several factors that you should consider before making the decision. Let’s go through some of those factors.

Microservices can be tricky. It demands a detailed understanding of systems, business operations, microservices tooling, and whatnot. On top of that, it’s difficult to find the right developers capable of dealing with a microservice architecture. To hire the right talent, you again need microservices expertise.

We, at Simform, have helped multiple companies build scalable software or modernize their legacy application with a microservices architecture. Our team consists of expert software developers with versatility when it comes to software development experience. Feel free to reach out to us if you are looking for microservices consulting services for your project. 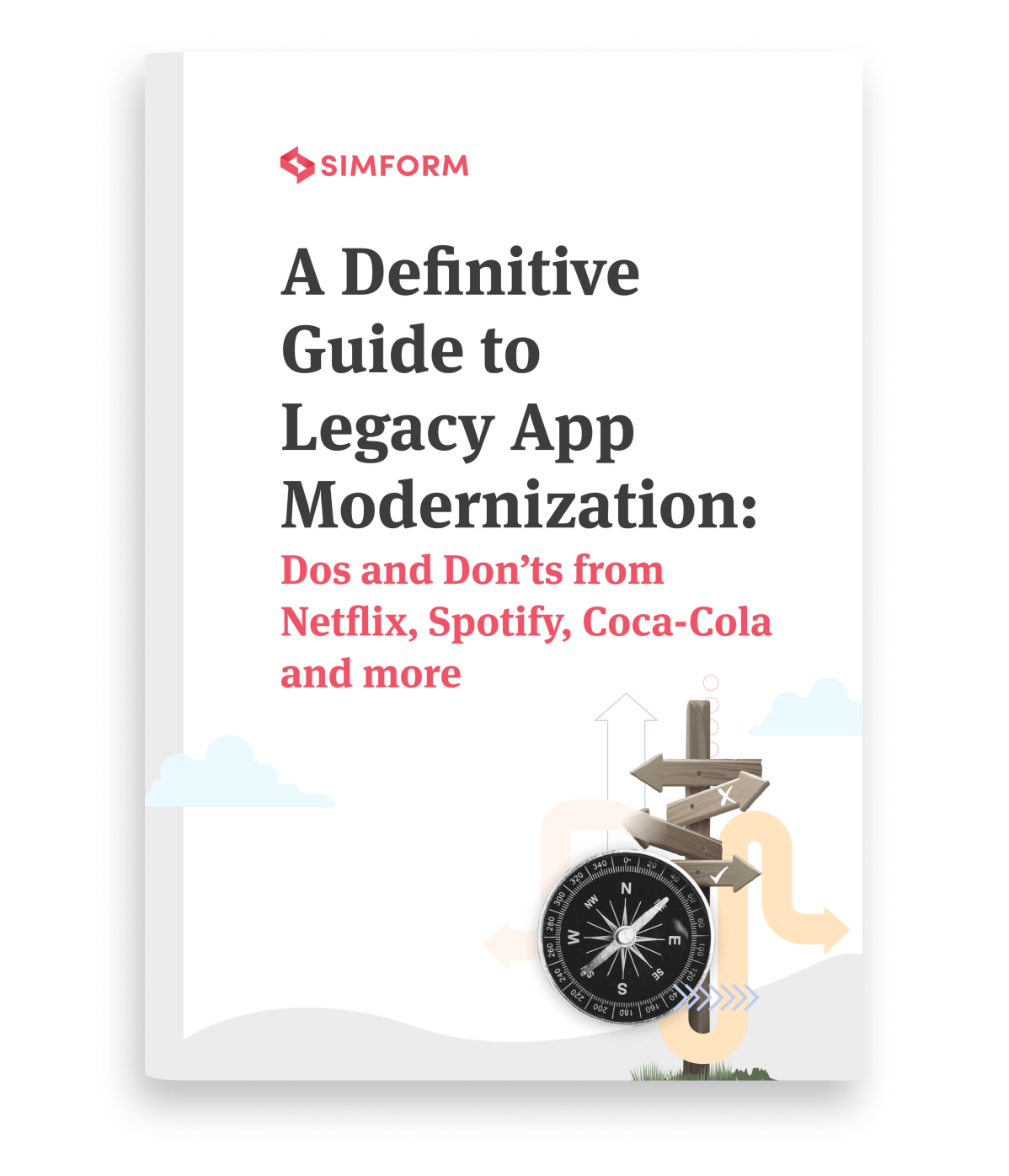 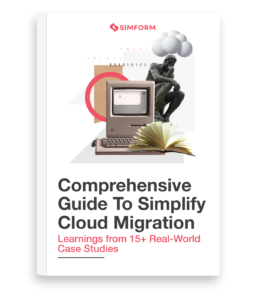