If you can see the web app development lifecycle plagued by these inefficiencies but can’t pinpoint the source of distress, chances are you’re paying off the poorly managed technical debt.

Just like financial debt, unattended technical debt compounds over time and potentially triggers a company’s downfall. 6 in 10 CIOs have reported an increase in technical debt over time, meaning the companies are paying off a larger metaphorical interest over the debt they incurred.

Editor’s note: In this article, Hiren talks about the reasons behind technical debt, tells you how it hampers frontend growth and gives you ways the fronted team can keep it from spiraling out of control. In case you require an expert to analyze your web app for technical debt, feel free to check out our frontend development offerings.

What is Technical Debt?

Technical debt is all the development work you need to do in the future that you skipped to maintain agility and profitability in the present.

Organizations, teams, and individuals don’t always stick to ideal development practices. Sometimes deadlines creep up, and developers decide to take a shortcut to expedite the product shipment. Other times, the team might not have the necessary resources to go the ideal route, so they implement a workaround to deliver the software.

Technical debt can be both deliberate as well as inadvertent and can stem from both reckless and prudent decisions. Technical debt quadrant, defined by Martin Fowler, is an apt representation of various situations under which companies draw technical debt. 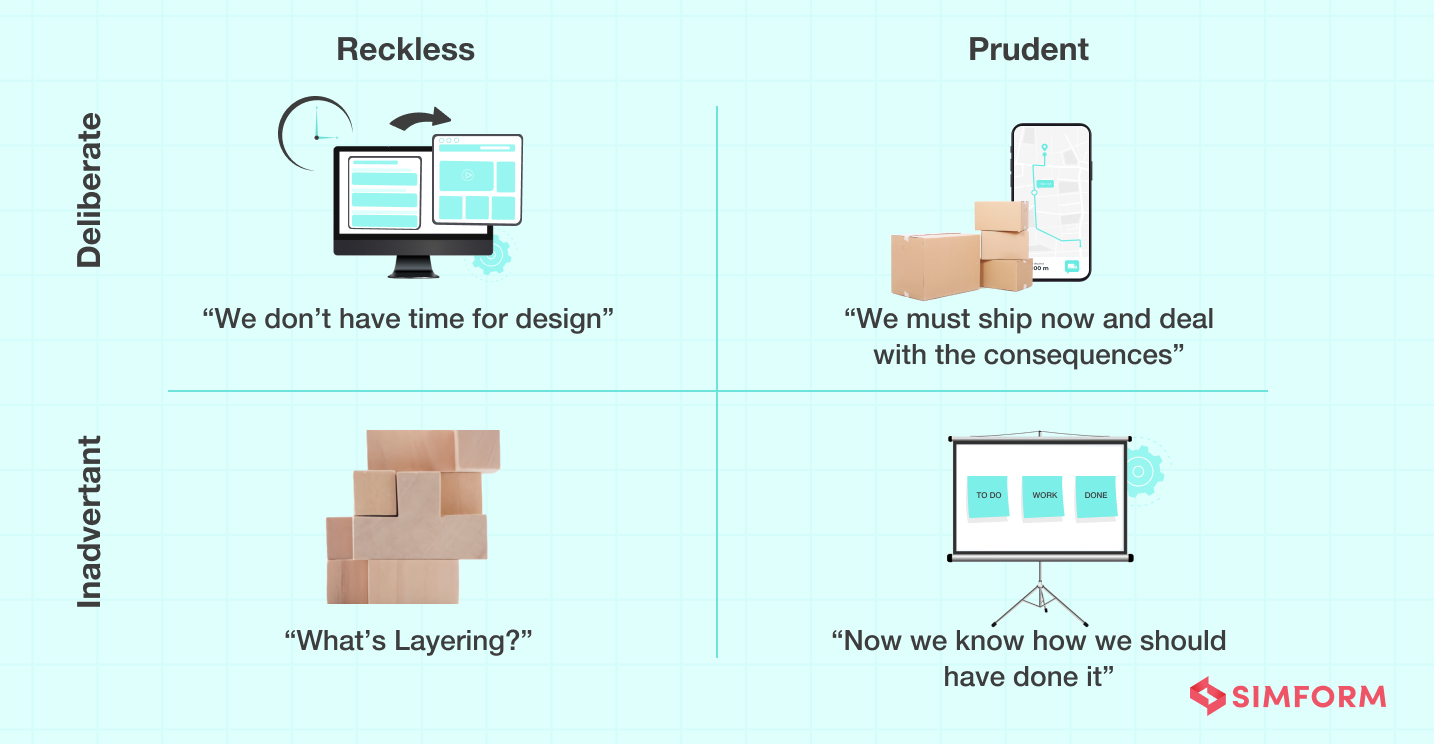 However, unlike financial debt, technical debt is inevitable. Frameworks become obsolete, new testing methodologies show up, and you learn new design practices on the job. The cleanest of codebases accrue technical debt over time by virtue of technological advancements.

Why Shouldn’t You Overlook Technical Debt?

All this fogginess around the quantification of technical debt gives birth to ignorance. Since you don’t see a tangible loss associated with it, you’ll ignore it for as long as possible. However, there’s only so long you can go before the debt becomes too much to handle. The repercussions of unattended technical debt can be observed at all levels within the company. Here’s how it affects the entire organization tree: 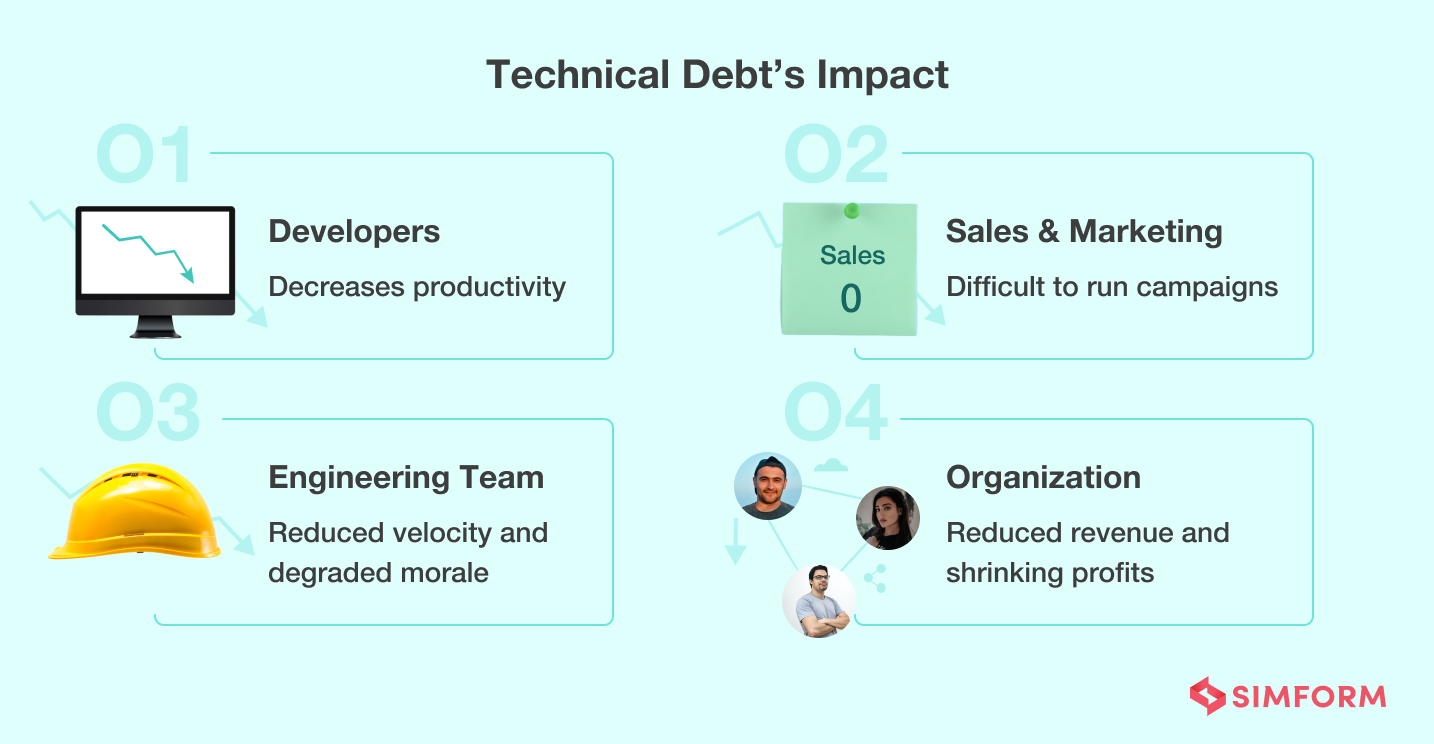 Engineers are the first to feel the brunt of technical debt. It directly impacts their productivity as it adds a lot of resistance to the forward motion in the development lifecycle.

Fixing problems in the existing codebase is challenging. If a developer has to spend a larger chunk of time on paying off technical debt rather than adding value to the software, their morale will take a hit. It’s why developers want to join organizations with a cleaner codebase. So too much technical debt not only makes your organization less appealing for potential candidates but also gets the existing developers to start looking for other opportunities.

Technical debt and sales and marketing

Sales teams thrive on boasting about the advanced software features or the ability to pivot quickly based on customer’s needs. Technical debt leaves them with very few tricks up their sleeves to close the deal, affecting their commissions.

Marketing campaigns require a lot of upfront planning. It’s crucial for the team to know when a specific feature or even the product will be launched. But since you lose predictability with increasing technical debt, these folks find it challenging to run profitable campaigns.

The poor predictability affects velocity. The workflows don’t go as planned, and the overall rigidity also affects their relationships with other teams. And then getting back from the rut of technical debt becomes even more difficult as the entire team experiences the hit on morale.

Technical debt and the organization

The internal friction between teams shows up in the form of bugs and errors on the final product, eventually shrinking the customer base. Frontend technical debt relays the anomalies fastest to the customer side. You must develop a sound understanding of how technical debt accumulates at the frontend and the steps you can take to keep it under control.

How Technical Debt Can Grow at the Frontend

These kinds of quick fixes start taking a toll during subsequent modifications, making each change harder and time consuming. It’s a classic example of technical debt incurred to match deadlines.

2. Outdated, poor, or no documentation

Proper documentation plays a vital role in the longevity of any software. Designers and developers should lay down the rationale and goals of the choices they make. The documentation makes for an easier understanding of the code for new members, and new additions to the codebase and refactoring becomes a breeze.

However, documentation often doesn’t stand high in the priority list of developers. As a result, even the smallest changes break the code, and team members would not know why.

Moreover, documentation becomes even more critical for the frontend since it helps bring the designers and developers on the same page.

Design is an inseparable part of the frontend, and designers can fall prey to the same behaviour that leads to technical debt. They also need to stick to all the best practices to roll out a polished product. However, failing to do so can quickly lead to poor turnout and reduced CTR.

Some instances could be– not testing a design with users to expedite shipping or leaving an inconsistent page design to save time is one way design debt accumulates.

For long enough, design and development teams have worked on the frontend as separate entities. Designers would come up with a design and then throw it over the wall for developers. Such an arrangement would obviously lead to a lot of chaos, and in turn, technical debt.

Cross-functional teams with designers and developers working together on the frontend are the need of the hour. We’ve discussed such component teams in great detail in our article on component driven development.

Technical debt accumulates by virtue of time as well. New libraries and frameworks with advanced features and capabilities keep popping up. And oftentimes, it’s impossible to say no to these.

There isn’t anything wrong with switching to better means, but the problem lies when the new framework isn’t backward compatible. Let’s take the example of AngularJS and Angular 2. AngularJS was a no-brainer for anyone building a single-page application for more than half a decade.

And then Angular 2 showed up. Since both developers and organizations want to stay abreast with the latest and best, the migration to Angular 2 was an obvious choice. However, since Angular 2 isn’t backward compatible, this led to substantial technical debt.

There’s only so much one can do manually! As the codebase grows bigger and complex, developers must use code automation. Failure to deploy automation can lead to confusion and a chaotic product development life cycle. Technical debt stemming from lack of automation can make scaling a distant dream for the organization.

Using open-source libraries and frameworks are two of the biggest reasons for technical debt.

These open-source libraries are often created for specific purposes, and even though they fit your bill, they aren’t always the perfect solution for your business. As you borrow from these libraries, you also borrow multiple dependencies.

It’s suggested that you always create a clean custom codebase free of dependencies that’ll eventually lead to minor refactoring and easier long-term maintenance of the codebase.

Now that we know of the different ways the technical debt can accumulate from the frontend, let’s also take a quick look at how it can be kept under control.

What can Frontend Teams do to Reduce Technical Debt?

Continuous integration and periodic build reviews are two ways remote teams could move forward when working on extended deadlines. While the idea of having separate code repositories along technical boundaries may entice project managers, the technical debt merging these codebases later might cripple the entire project lifecycle.

These two approaches help instill a culture that involves keeping the build intact through efficient communication and urgent development efforts.

Ideally, your codebase should have clean code which requires no refactoring from the get-go. However, that’s not always possible under deadlines and client requirements.

In such a case, you could take care of refactoring as early as possible to retain its efficacy. And do it with a sense of purpose. Daily refactors will only affect team’s morale and be a hindrance to forward motion.

Avoiding technical debt is impossible at times. But when you knowingly incur technical debt, make sure you document all about it. Your documentation should reflect the reasons, consequences of technical debt and a possible roadmap to deal with it. This can save you much time and resources when you decide to pay off the debt in the future.

4. Take ownership of the project

Teams often deal with technical debt as the burden they don’t want to carry. And these kinds of emotions are natural when you are overwhelmed by project requirements and deadlines already. However, the victim mentality doesn’t cut the deal. Here taking collective responsibility for the code quality enables developers to manage technical debt efficiently. The entire team can also push back at times when it sacrifices quality to deliver code as per the management’s requirements.

Testing is another area where teams and individuals cut corners. While testing may seem like a time-consuming and daunting process initially, proper test coverage can save you from a lot of refactoring. Without testing, you are unsure if a change in the codebase will break something. Unit and acceptance tests will throw this uncertainty out the window and put you in control of the codebase.

Technical debt is why you should always make room for tackling it in your sprints. The way teams regularly deal with it varies– some would allocate an entire day, while others might reserve 20% each day.

No matter the arrangement, the gist here is that you should always have plans for technical debt sprints. While these sprints may not deliver any tangible benefits for clients and users, they keep the team sane and maintain the pace of development despite the growth.

Customers don’t appreciate a broken user experience. Interfaces created without a design system can vary so much that they don’t even appear to be from the same brand. Moreover, the internal team members dealing with those interfaces end up getting confused.

The design system, pattern library, and style guide are different ways to give the frontend team a north star to work with. These eliminate most design inconsistencies from the interfaces and reduce the technical debt considerably.

Often, the goal of remote frontend teams is to ship out the product as quickly as possible without much emphasis on the long-term maintenance of the codebase.

We, at Simform, have a rather different approach. We engage designers and developers who understand the reasons and consequences of technical debt. The knowledge enables them to undertake the best frontend development strategies from the get-go that help minimize technical debt.

Additionally, our project managers follow a UX-driven engineering approach that enables us to translate design experience into code. Moreover, we work as an extended part of your team, and our well-documented coding style makes the information flow that much smoother.

So, if you’re looking for an expert remote frontend dev team and technical debt makes you anxious, then your search ends at Simform. Feel free to reach out to us with your requirements and questions, and we’ll chart the roadmap to your success. 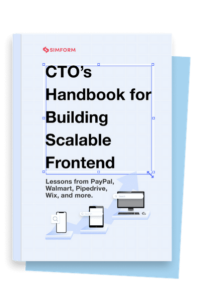 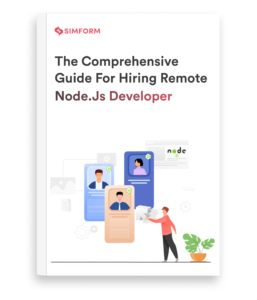