Component Based Development: The Definitive Guide to Making a Scalable Frontend

Learn all about component-based development and what are the best practices to follow to experience all its advantages to build a scalable frontend.

Component Based Development: The Definitive Guide to Making a Scalable Frontend

Fast, scalable, and flexible aren’t the terms you associate with frontend monoliths as, by nature, they get sluggish with time and every feature addition.

Component-based development, for one,  is a modular approach that decomposes frontend monoliths and introduces benefits similar to that of microservices at the frontend. The byproducts of such decomposition are expeditious development, high scalability, and ease of pivoting.

In this article, you’ll develop a better understanding of what components are, how component teams function, and get actionable tips to adopt this fantastic web development strategy. So without further ado, let’s get started:

If you’re aware of Component-based development and ready to discuss your requirement using it, we recommend discussing with Simform’s experts to unlock new possibilities, for any assistance or support do consider exploring our web app development offerings.

What is Component-based Development?

Component-based development is a software development strategy that uses loosely coupled components to build applications with emphasis on reusability. In fact, it’s lately gained popularity among organizations like PayPal, Spotify, and Uber that are leveraging it to boost and standardize their frontend development. 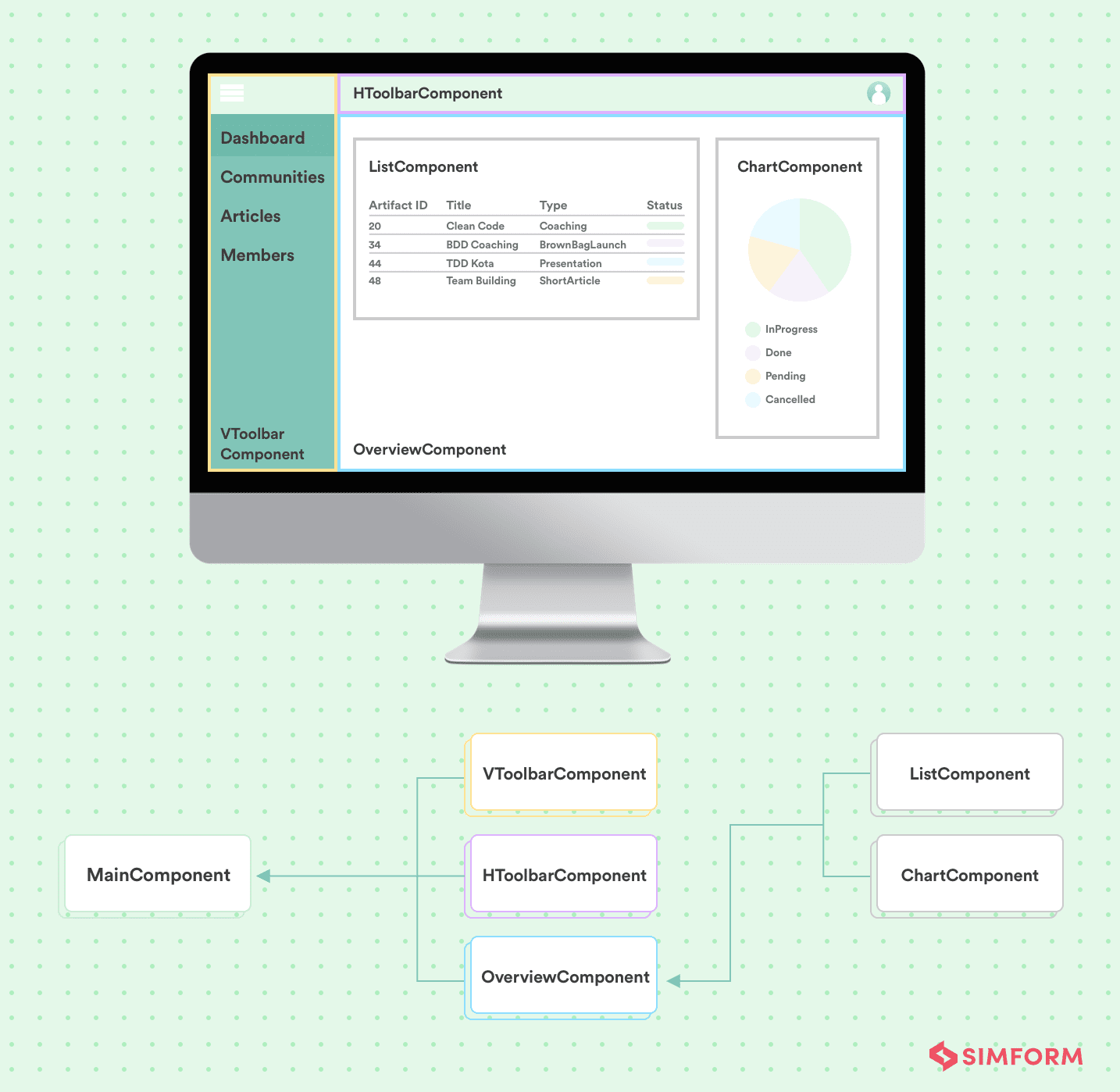 Consider a typical web page with elements such as header, side panel, search bar, content body, etc. Under a component-based architecture, all these are independent of each other and called components. This makes for a modular system where multiple teams can work simultaneously on individual components in the same interface.

Components are the building blocks in a component-based architecture that are reusable, modular, well-defined implementations built according to prearranged conventions. They can be used invariably across different interfaces and modules without the need to rewrite code or compromise UX integrity. 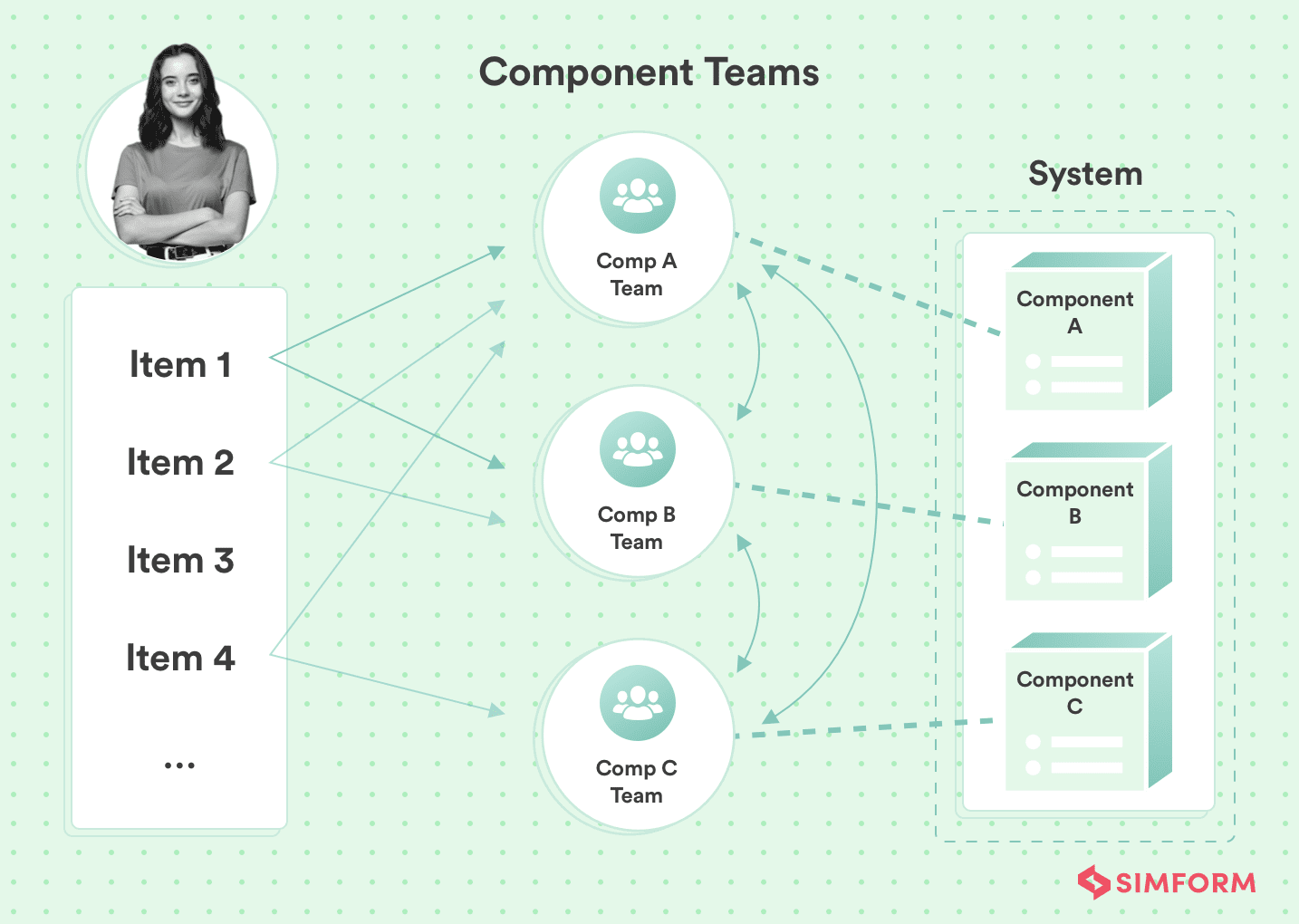 These are cross-functional teams that bring together members with varying expertise (design and development) to collaborate and put forward a polished component, unlike older team structures, where designers and developers would struggle to be on the same page. Component teams come up with solutions that can be reused across the system. They take complete ownership of the product and keep improving it without affecting the rest of the ecosystem.

Component teams are most useful when dealing with legacy technology, serving algorithms that require technical and theoretical competence, and establishing security and compliance. They also help when you don’t have members capable of working on full-stack. However, it must be noted that if you are eyeing organizational stability with a suitable frontend development strategy then you might want to look into micro-frontend architecture.

You must’ve realized by now that component-based development is one of the best ways to develop a frontend that is also set up for the future. If you still have to deal with a frontend monolith, now is the right time to start moving towards this modular approach. The transition will take some time and resources, but the efforts will be worth the final product. Here are a few best practices to keep in mind while adopting this architecture:

The components you create will be used invariably across the application for various instances and not just for what you built initially. It’s crucial that your developers understand the broader purpose of these components, for they’d be used by other teams and individuals.

Functionalities are highly interdependent in a frontend monolith, and no one wants to see it all fall apart. You can begin with finding out features that are already decoupled from the monolith and can exist by themselves. You can quickly turn them into components and decompose the monolith into a modular system.

Style guide, universal design guide, design language system, etc., are the different ways organizations lay down component development standards. Likewise, you could model an ideal design system that accounts for all the questions one can ask about a component. This must facilitate the building process for your component teams and help other groups interact better with the component.

The USA Today’s frontend team adopted a similar approach and laid down five questions they always wanted answers to for every component:

To achieve true reusability of components, you need to stick to the ‘separation of concerns’ principle. It holds well, especially for frontend elements where design and business logic are applied simultaneously on a component. By keeping the two logics separate, you’ll retain the flexibility and make lives easier for other teams interacting with the component.

Leverage various tools at your disposal

There are plenty of tools available to take care of specific functions throughout the development process. Right from composition to testing, here are a few tools you might want to consider while building a scalable modular frontend framework:

Inspired by chemistry, Brad Frost introduced a practical approach to develop interfaces called Atomic Design. It is slightly different from component-driven development because it proposes a standardized language for mentioning components and the labeling structure. The different stages in Atomic Design are: 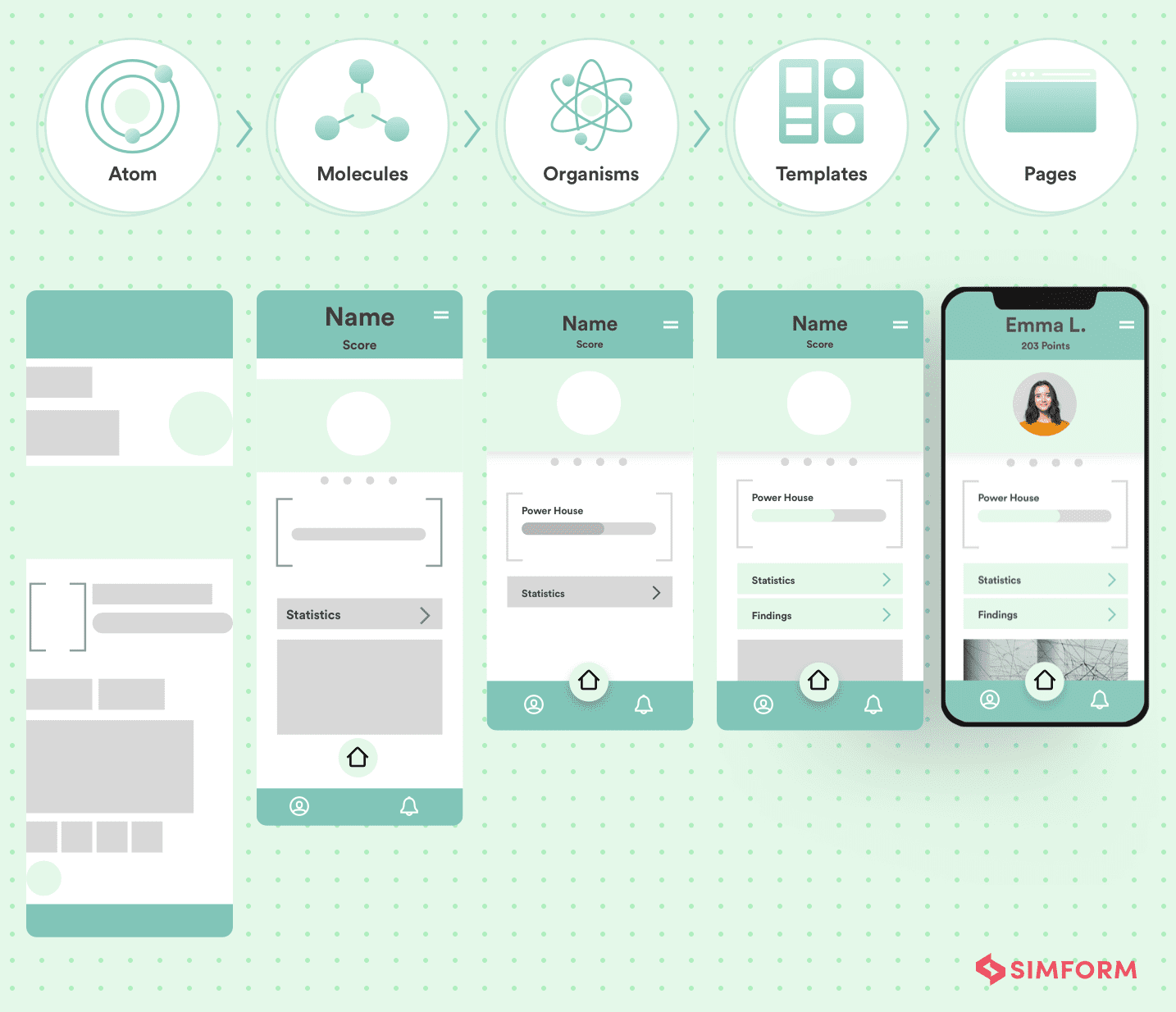 By applying this methodology in conjunction with component-based development, you also embrace a universally accepted language followed by the Atomic Design community worldwide.

Even a component can get bloated over time with different members adding more functionalities for various use cases. However, the single-responsibility principle can be helpful in such a scenario. Suppose you find a component with too many props that make it confusing and difficult to maintain. The best approach is to break it down into smaller components responsible for a singular feature.

Some of you might roll over your eyes over this tip, but we can never speak enough of automation. Find ways to automate as many processes in component-based development. The more you automate the easier it will be to stick to proposed standards and guidelines.

Component based development brings in a ton of benefits for individuals, organizations, and clients alike. Here are a few reasons why you should consider adopting this:practice

Speed is a virtue sought by multiple teams, but they often find themselves reinventing the wheel when starting a new project. It is a time-consuming process and takes up a lot of resources that could’ve been otherwise used for more impactful business requirements.

Component-based development can drastically reduce development time, further nurturing your relationship with your user base. With a shared library accessible at all times, teams no longer need to create solutions from scratch. They can directly select components from this library without worrying about non-functional requirements such as security, usability, performance etc. What’s more, teams have reported upto 60% faster development by leveraging this strategy.

How many times have you heard that a codebase bloated to such an extent that developers steered clear of it? They are usually fearful of taking the entire system down trying to improve a specific functionality. Such a scenario leads to the accumulation of inefficiencies over time and makes maintenance a challenge.

The modular nature of component-based development models in software engineering keeps you away from such unwanted situations. It decomposes the frontend monolith into smaller and easily manageable components, making any upgrade or modification a breeze. For instance, a single bug-fix propagates through all the implementations and prevents the need for manual upgrades. This makes up for faster, cheaper, and, most importantly, more straightforward frontend maintenance.

We already shed some light on component teams and how they function. For frontends, these teams consist of both designers and developers. Organizations implementing component-based frontend development generally have a design-language system that states all the guidelines for how the components are supposed to appear and function.

These cross-functional component teams treat the design-language system as the single source of truth and build components without external assistance or interference. Since the components are self-contained and don’t affect the system, the component teams remain autonomous, which means they have a great deal of freedom and flexibility.

Some advantages of autonomous teams are increased accountability and higher emphasis on creating rich solutions rather than teams figuring out a way to coexist in a highly-tangled system.

Code duplication has plagued processes around teams and organizations. Developers across teams end up writing similar code for different instances across the applications. If not, developers spend a considerable amount of time trying to find applications using similar code.

With a component-based software development process in place, components once created can be easily used across as many modules as needed. Reusability helps spread the development efforts and cost across applications.

With an unsupervised frontend development approach, you might end up delivering inconsistent and confusing experiences to your users. For instance, Atlassian had 60 different types of dropdown menus because of years of unorganized development. It realized it needed some structure in its development approach. Ergo, it adopted component-driven development.

Since a design-language system is often adopted in this modular approach, it automatically lends a UI consistency to all the components created in sync with the design document. As these components are further used across the different interfaces, the frontend appears highly consistent despite being made out of multiple independent components.

In the beginning, organizations often don’t account much for growth and scalability. Once their digital products get some traction and they start getting subscribers, they realize they need to set up the system for scalability. The first step in this direction is usually to adopt the microservices architecture for the backend. However, the frontend remains the same monolith and poses issues in enjoying all the benefits of a microservices architecture deployed at the backend.

Component-based development allows for extending the benefits of a modular architecture to the frontend as well. As the web application scales, more components for specific features can be easily added without refactoring the entire codebase.

Adopting a component-based development strategy is no easy feat as the number of moving parts in your system will increase gradually, there will be a need for robust structuring, and you’ll need team members capable of keeping up with these challenges.

Simform has been an extended team for startups and enterprises worldwide for more than a decade now. We can help you with a cross-functional component team capable of taking care of end-to-end development needs. Our skilled developers are equipped with top-notch development skills and can expertly assist you in building a scalable frontend using component driven development. Connect with us to discuss how we can contribute to your modular frontend. 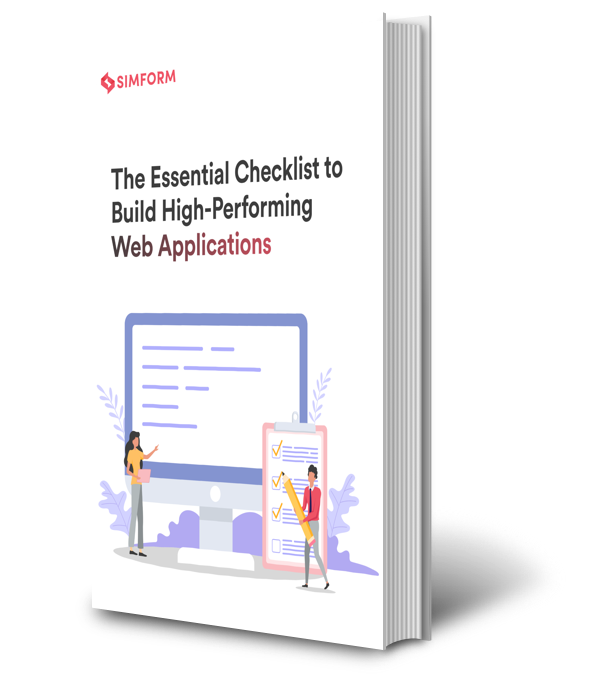 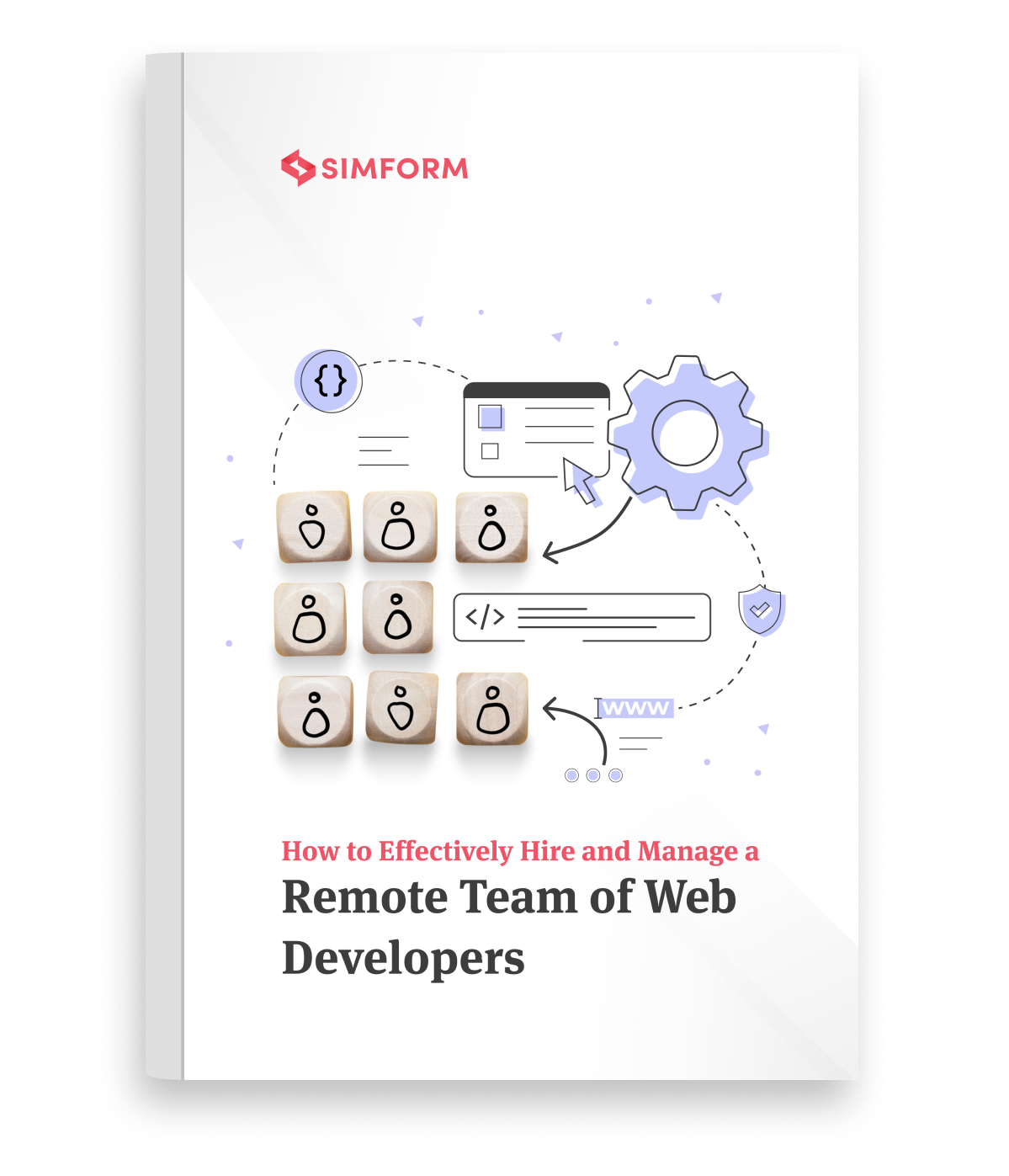