Quick Summary :- Redesigning frontend architecture creates an engaging navigational experience for users by building sustainable workflow and process-driven apps. This blog introduces you to a set of evaluations to go through before jumping to redesigning your frontend architecture along with the best-followed practices to improve its design.

The goal here was to create a free-flowing navigational experience that would enable guests to expertly move between pages on the web apps. And what better way to accomplish this than switching to React? In addition to this, it developed a Design Language System (DLS) to speed up the iteration lifecycle and Airshots to access thousands of screen permutations instantly. Ultimately, the team was able to manage stack reconfiguration, client-side routing, code splitting, and lazy loading.

Many organizations like Airbnb struggle to figure out how to design a frontend that serves millions of users with a seamless experience. Rethink your frontend architecture that functions flawlessly into different devices, environments and makes an effortless user interaction.

Let’s begin with the definition before leaping to this reform.

What is frontend architecture?

Frontend architecture comprises a bunch of practices and tools that upgrades your application’s code quality. What’s more, it also presents you with the opportunity to create a productive, scalable, and sustainable workflow.

Let’s take the example of building a house. First, architects create schematics of the house for better structure and navigation. Then you need labor to lay down the brick and mortar foundation and do the construction work.

The same goes for the software products where frontend architects build a system for frontend developers to code. You can also call it a standard against which the code is being tested. It sets a tone for writing code and remains a guide to the developers throughout the development, resulting in impeccable user experience, zero disappointments from users, and quality software product development in less time.

Why do you need a frontend architecture?

We have a ton of reasons to convince you to rebuild your architecture, but let’s approach this slowly.

The first is to establish coherence between UX and UI by eliminating more refreshes between views, selecting sizes and designing the layout of interaction elements, and deciding other predefined user elements that add to the app accessibility. This keeps your potential users glued to using your application, and your app now has effortless user interaction.

Secondly, let’s think of a shopping mall with excellent image-based navigation, welcoming space, visual markers, and things that help customers navigate the building. Places like these are more likely to be visited compared to congested architectures. In web and mobile apps, good navigation means using white space, easy-to-understand language, appealing color combination, interlinking of links that redirect users to the most visited pages, and other design principles that result in an accessible UI.

Lastly, to make frontend modules independent of each other, you need a design that divides and displays the information as required. To meet these requirements, you need to comprehend design principles and expert architects that provide the required structure for frontend developers to code upon.

Pinterest, for one,  had a slow web experience and only turned 1% of users into sign-ups, logins, and other native app installs.

Once it rebuilt its mobile web experience using React, Redux, and webpack, it saw noticeable changes in its business interests in just 3 months.

It trimmed down the Javascript code and revamped the traditional platform to a progressive web app as a part of the frontend redesign and reduced network transmission and Javascript compile time significantly in the latest app. It also underwent some additional changes like navigation transitions, image optimizations which helped launch a faster and more responsive application.

How to re-evaluate your frontend architecture?

Simform, as an extended tech team, helps its clients visualize and build the right frontend design by evaluating their existing architecture, assessing the requirements, and helping with better solutions that make application design more fluid. The steps shared below are part of our considerations to reevaluate your frontend architecture.

It can be tempting to jump right in and take aggressive steps to revamp your architecture. But before you commit yourself to this ‘next big step’, it’s crucial that you address these four key parameters:

LinkedIn, for one, thoroughly studied the required determinants to speed up their web client before undergoing two types of front-end changes: framework-level and application level.

It split the application into several mini parts and enabled lazy loading in Ember under the framework-level changes. At the same time, it made some significant changes in the CSS layer for structuring the CSS and reducing the verbosity for application styling.

The hard work and consistency of teams brought outstanding results by doubling the web application speed.

It’s always a good idea to study real-world examples that match your business case. You can analyze the technicalities, risks involved, and performance data to touch all bases like performance and validate your architecture. This also allows you to set thresholds and realistic expectations.

Be tech-agnostic while assessing your options

By now, you’ll have a clearer idea about implementing new client-side architecture designs. And so now it’s time to compare the options available and find out which works best for you.

React, Angular, Vue, Svelte among others are some remarkable frameworks to look at. One of the doable ways to weigh your options is to build a prototype application in each framework to understand what better suits your goals and requirements. This can be a breeze for a tech team with a diverse portfolio in frontend development.

Take inputs from all the stakeholders of your application, ask product and project managers to share their concerns regarding end-user perspective and product development life cycles before re-architecting. This will give you a holistic view of redesigning the frontend and introduce you to challenges that may arise while implementing your goals.

Why and Where Should you Use React for Web Development?

What could be done to improve your frontend architecture design?

Micro frontend architecture lets you split your application into multiple smaller applications that are distinct yet semi-dependent.

This increases the development speed and boosts scalability since different development teams work simultaneously on different parts of the system. It also saves development efforts as any changes in micro frontends don’t affect the performance of the entire web application. 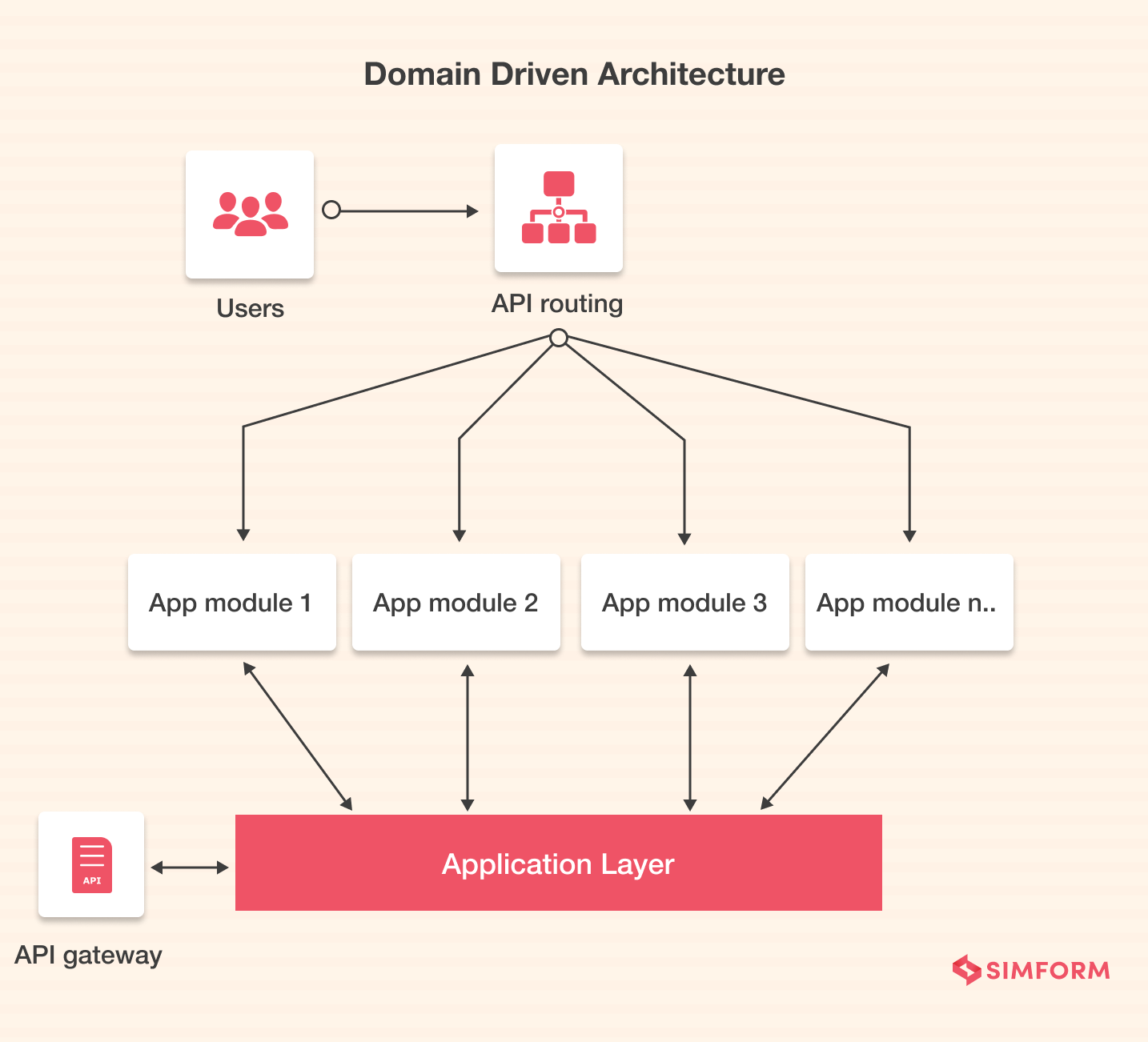 You can adopt a domain-driven design with a micro frontend to simplify larger applications and build modern frontend apps that do the heavy lifting. Here the data and events explicitly interact within the app modules without adding more complexity and bugs. As a result, your development process becomes faster and more aligned, resulting in seamless deployment and incremental upgrades.

Component-based architecture is popular among frameworks like React and Angular as it encapsulates one feature in a way that it becomes shareable among other modules. Plus, it facilitates animations and transitions that are most required in modern apps.

Additionally, you can compose single components by defining some properties. In fact, large and highly interactive applications like Instagram apply the model-view-view-model pattern to facilitate the reuse and customization of components in multiple places.

What’s more, it has endless benefits–

ABC’s frontend transformation unified its digital products across all the verticals and delivered consistent user experiences.

Australian Broadcasting Corporation leveraged component-based architecture for their newly built API-driven frontend architecture of the ABC life website. The project was driven by keeping the modular design as its central theme and creating a component library defined by its DLS. The team aimed to–

It is difficult to handle multiple releases and upgrades under a single entity when your focus is to build scalable applications. CI/CD pipeline maintains synergy within the application modules and among different applications, especially in microservices and component-based design. To do this, adopt CI/CD pipeline and enable teams to deliver quality codebases more frequently.

Here’s how you can make CI/CD work for you–

Use Design Language System as a contract between UX, Engineering and Product Teams

Just like Airbnb, a design language system can serve as a reservoir of reusable components with standard documentation. It sets the tone for your design and development teams, reducing the otherwise extra effort of bringing everyone on the same page.

Furthermore, the standard system facilitates the reuse of components to achieve efficiency. Since it has a set of rules to build components, it also becomes easy to maintain consistency across all platforms, further boosting scalability.

Also, people involved in this should direct the communication between design and engineering teams. Then, with a deep understanding of user interactions with the product, they can build apps that deliver a great user experience. Finally, you need frontend architects and frontend developers who create a consistent and usable interface favorable to as many as a billion users.

Turn complex and inflexible code into clean code and reduce the overall technical debt of the project by refactoring it. Often this kind of complexity happens due to tight deadlines. Still, if the code is kept as clean as possible from the start, you can expect lesser iterations later, and modifications become smooth.

Redesigning of frontend architecture for code reusability, better maintainability, and standard principles speed up adding functionalities in applications later. End-users benefit from more accessible, handier apps and can enjoy faster upgrades with the latest features. The number of active users increases as they could effectively use the system as happened in Pinterest’s case; it received tremendous business growth after making a PWA app. app.

We, at Simform, have partnered with a host of companies to evaluate their frontend architecture needs and find top-notch architects to add artistic sense to their product design.

Reach out to us for an in-depth analysis of your existing frontend architecture and the best possible solutions to revamping your app experience. 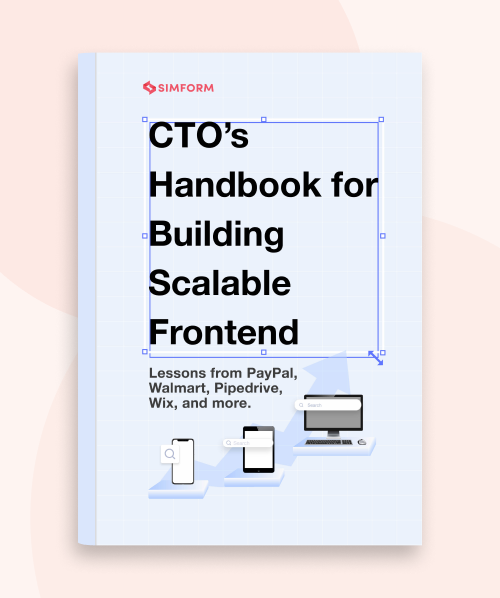