The article gives you detailed info on the Laravel vs Node.js comparision by gauging the two against parameters such as architecture, testability, and more.

Quick Summary :- Choosing the right backend framework is critical to the success of your web application. In our series of backend technology comparisons, we take Laravel vs Node.js in this edition. We do an in-depth analysis of both these frameworks and tell you which one is better in terms of performance, scalability, testability, and various other parameters.

So you have this exciting web application idea and you can’t wait to get started. You’ve done all the homework right from market & competitor research to design and usability strategy. The next step is to get on with the web development process. But as soon as you get into the development phase, there’s a curve ball thrown at you. “Which backend framework to choose for the project?” The success of your web app is very well going to depend on what happens behind the scenes afterall.

Laravel vs Node.js is most often what it boils down to when choosing the perfect backend framework for a web application. In this article, we’ve expertly dismantled the Laravel vs Node.js debate to let you know which one is the most suitable for your project. We assess the two frameworks against the biggest concerns of app owners such as scalability, database support, developer talentpool, and many others. So go ahead and find out which of these two frameworks will go well with your priorities.

Editor’s note: if you’re looking for professional assistance to get your project done, feel free to browse our web app development offerings.

What is Laravel? – An Overview

Laravel is an open-sourced web framework known for its server-side handling of routing, HTML authentication, templating, and more. Created by Taylor Otwell, Laravel is written in PHP and is based on Symfony that provides reusable PHP components/libraries. Since it is a server-side-based framework, with Laravel, you can build applications with pre-defined architectures, customized backend logic, web portal, templates, and full-stack apps as well as manage SaaS products.

Use cases of Laravel 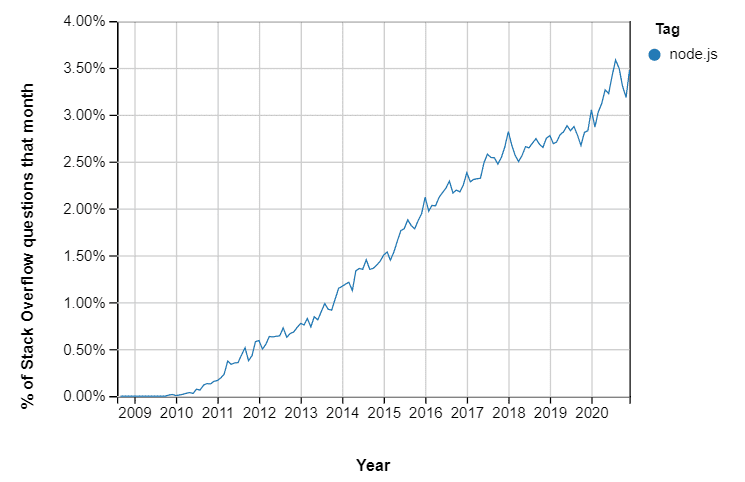 Laravel vs Node.js— Pros and Cons

While performance should not be a killer factor for small projects, it becomes extremely important to consider it when building complex and large projects. With that being said, let’s compare Laravel and Node.js in terms of performance.

How does Laravel stand out in terms of performance?

The performance of Laravel-based applications can have implications on the success of a project, and it is said to be slow. But, its community suggests that it can be improved for better performance if optimized appropriately, which may allow applications to perform efficiently even under 20ms.

When choosing a framework, it’s important to choose flexibility and avoid any strict enforcement of architecture and guidelines.  As a matter of fact, it’s always recommended to treat a framework as a guide, not methods, and standards. That said, let’s juxtapose Laravel and Node.js with each other and check whether they are flexible in terms of architecture.

What kind of architecture does Laravel support?

Laravel follows the Model-View-Controller (MVC) architectural pattern that provides the ability to split developer roles for a more comfortable development process. In other words, while a frontend developer is working on the views, a backend developer can be working on the controller logic simultaneously.

The MVC patterns also offer full control over the application, which might come in handy to choose application-specific routes and customize how your application appears on a global scale. This improves the SEO of the application in return as well. Implementing external APIs and reusing application logic is effortless with Laravel’s MVC architecture. Thus, the creation of immutable backend support for any web application is always possible.

Frameworks significantly influence the web application scalability, therefore, the right choice of framework is important. Here’s how Laravel and Node.js stand out in terms of scalability.

Popular apps using Laravel for years are scaling up their applications without any limitation. Laravel inherits scalability from PHP as it proffers support to rapidly growing businesses. By choosing a good database and load balancer, Laravel can achieve massive horizontal scaling.

Ease of testing— Laravel vs Node.js

To be able to work without a glitch under continuous, high load and growing market expectations, your application development project needs to go through a series of tests to ensure compliance with the UI standards, compatibility, and usability. Here’s how Laravel and Node.js stand out when compared with testing.

How easier is it to test a Laravel app?

Given the fact that Laravel functions with PHP, there are many testing tools available to ensure the creation of a bug-free application. However, it is understandable to feel overwhelmed by the number of tools and resources available for testing. To make the testing process more comfortable, Laravel tests code in two distinct levels known as Unit tests and Feature tests.

Laravel, by default, has a robust testing documentation and provides all the tools you need to test the application environment at several levels, including the ability to conduct mock tests by mocking application codes and events.

Is Laravel compatible with microservices architecture?

For the past few months, the need to use Laravel with microservices architecture was so intense that a developer came up with a framework – Lumen. It serves a similar purpose and is a leaner, smaller, and lighter version of Laravel.

How good is the database support for Laravel?

Whether other databases will support Laravel, only the future can tell. But say, you are comfortable with the databases that Laravel supports, you will face no limitations in creating a wholly controlled relationship between the database and the web app.

PHP holds 77.5% of the market when it comes to server-side programming of web applications. Laravel has a vast community with more than 46,231 active users, 18,105 threads, 69.6k Github stars, and 4.6k real-time watchers. The maximum time taken to resolve a Laravel query by the community is not more than three days. PHP and Laravel combined has a powerful community, where developers share Laravel podcasts, news, documents, repositories, etc. Following are some of the places where you can meet the Laravel community:

Node.js holds a well-supported and robust community. It is reported on Stackoverflow that 36.19% of professional developers use Node.js for frameworks, libraries, and tools. Tech giants such as Amazon, Facebook, and Google have made significant contributions to the Node.js environment, making the technology more credible.

How convenient is it to hire Laravel developers?

With the vast community of PHP and Laravel worldwide, it is no rocket-science to hire a Laravel developer. You can almost find a Laravel developer in every corner. But it is essential to keep in mind that rookies might find it challenging to handle its advanced features. Hence, the ones you hire must have the know-how of handling Artisan, Eloquent ORM, and caching. The average charge for employing a Laravel developer is around $15 to $30 per hour. Laravel also offers an official platform to find Laravel developers.

We hope the comparison must’ve helped you look beyond the Laravel vs Node.js debate and pick the appropriate backend framework for your next web application. Both the technologies present some tough-to-overlook features, and we also highlighted some of the potential pitfalls of using them. Let’s conclude with the most suitable use case for both the frameworks.

Whether it is Laravel or Node.js, we are here to help you build full-fledged web application.

Get our Free Consultation 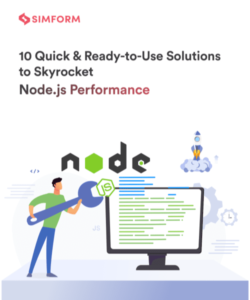