7 Key Steps to Implement Devops Strategy in Your Organization

A significant cultural shift, new processes, and right tools — make a successful DevOps strategy. Learn how to do it right here.

7 Key Steps to Implement Devops Strategy in Your Organization

Over the past decade, the digital industry has witnessed significant developments in networks, storage, smartphones, and the cloud. Now, nearly everyone — from my seven-year-old niece to my 86-year-old-grandfather can easily access software-driven innovation on-demand.

The market size for custom software development was valued at $388.98 billion for 2020 and is expected to grow to $650.13 billion by 2025. However, optimizing the software development process is easier said than done! The challenge for businesses lies in accelerating and automating the write-test-deploy cycle without breaking anything along the way. Comes into the picture — DevOps strategy.

When we say DevOps, it means a collaborative effort between the development and the operations unit. The days when a developer would write a code and then wait for ages to get it deployed have gone for good. But, yes, implementing DevOps without any strategy might result in a disarray of activities. To avoid so, read on and learn how to implement a clear DevOps strategy in your organization and fast-track your software delivery pipelines.

Simform is a leading DevOps services provider that enables companies to better serve their customers by executing DevOps philosophy, practices, and tools effectively. Let’s connect; your great idea deserves great implementation after all!

As we know, conventionally, both the departments — development and operations have different incentives and goals. Unfortunately, the conflicting roles often lead to the “dev vs. ops blame game.” DevOps emerged as a solution to these issues. A clear DevOps plan enables the organizations to remove the bottlenecks that slowed the innovation by blending two IT worlds. 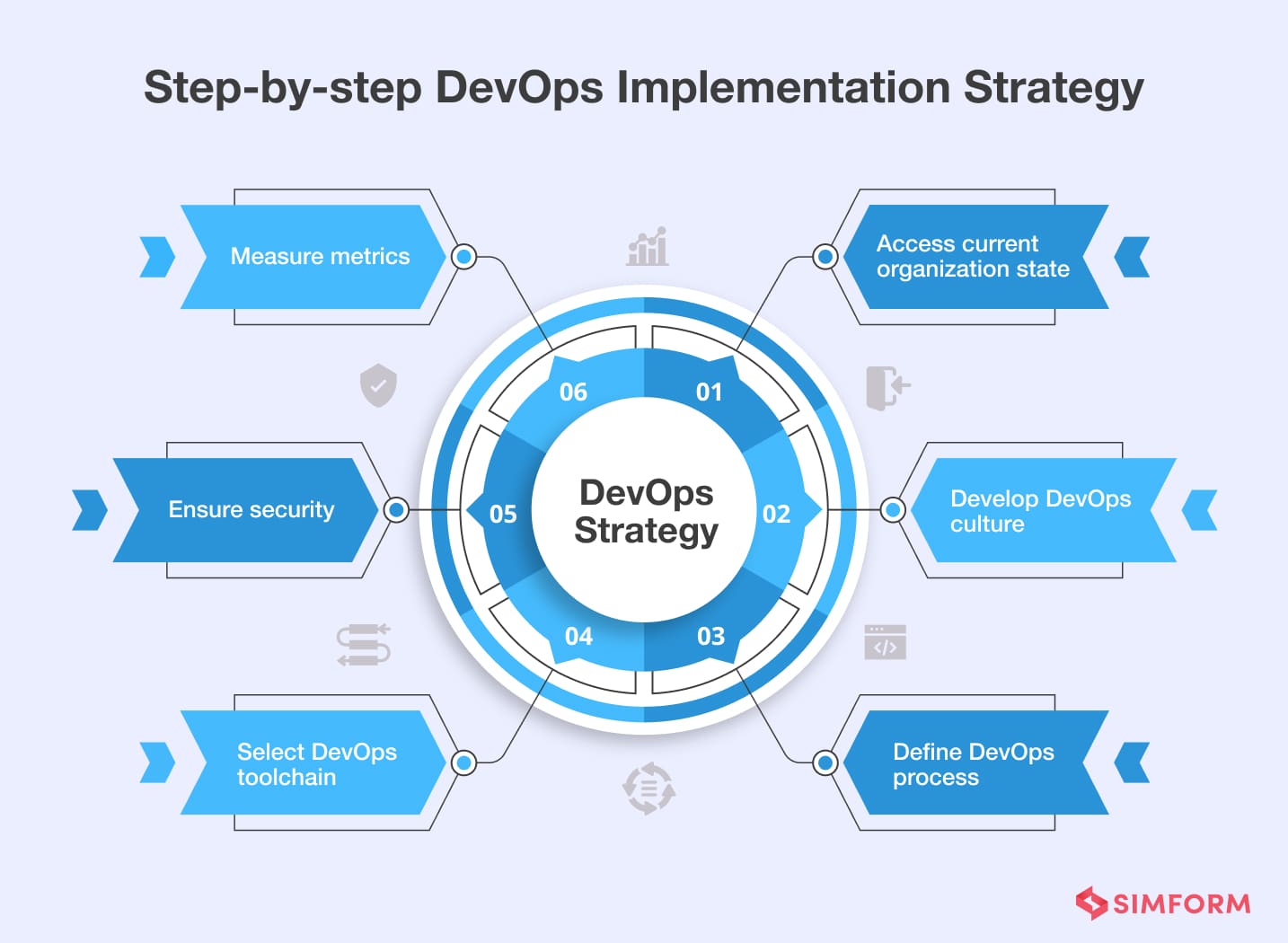 While building a DevOps strategy, you should strive to achieve five parameters — scalability, reliability, collaboration, frequent and rapid delivery, and security. Here, you’d hear a lot that DevOps and Agile go hand-in-hand. Yes, with their iterative nature, the relationship between DevOps and agile is complementary. However, the DevOps strategy should be treated as a separate initiative.

Following are the steps that will create a successful DevOps implementation roadmap for your organization.

DevOps’s real-world implementations can be challenging as it’s always difficult to replace the existing methods with newer ones. So, first, you need to thoroughly analyze your company’s pre-DevOps situation and understand the solution patterns of the applications you want to build.

For example, Netflix could not ship DVDs to their members for three days because of major database corruption in 2008. This situation made them realize that they have to move away from vertically-scaled single points of failure towards horizontally-scalable, highly reliable, distributed systems in the cloud. As a result, after seven years of diligent efforts, Netflix completed historical cloud migration to AWS in 2016.

Besides, with increasing numbers of subscribers, Netflix’s struggle with the monolith system increased. Also, customizing Windows images was manual, time-consuming, and error-prone. A thorough understanding of the company’s current state made Netflix aware of all these problems. Consequently, they improved the methodology and service deployment by leveraging new technologies and developing their own tools, which we’ll talk about later.

How Netflix Became A Master of DevOps?

2) Develop a DevOps culture and mindset

Ultimately, DevOps is a cultural shift about increasing communication, transparency, and collaboration between development and operation teams. Or else there can be more chaos. Gartner confirms the same and predicts that because of the issues around organizational learning and change, 75% of DevOps initiatives would fail to meet expectations through 2022.

We can learn an essential lesson from the example of Etsy, an online marketplace. Its DevOps journey is all about an indomitable spirit of a team that measures its success by failure. Pre-DevOps, Etsy was growing at a regular pace, following the traditional waterfall approach.

DevOps enabled them to have a team that was at peace with each other, the kind that everyone would want in their corner when the site breaks. This attitude helped them achieve 80 releases a day rather than deploying code twice a week.

Two points you should keep in mind are – clarity regarding expectations and an environment of psychological safety. Then you can develop a proper DevOps culture in your company that will help you proceed further and align your processes, tools, and people toward a more unified customer focus.

By defining the DevOps process from the beginning, you can improve infrastructure provisioning, continuous development cycle, and testing. 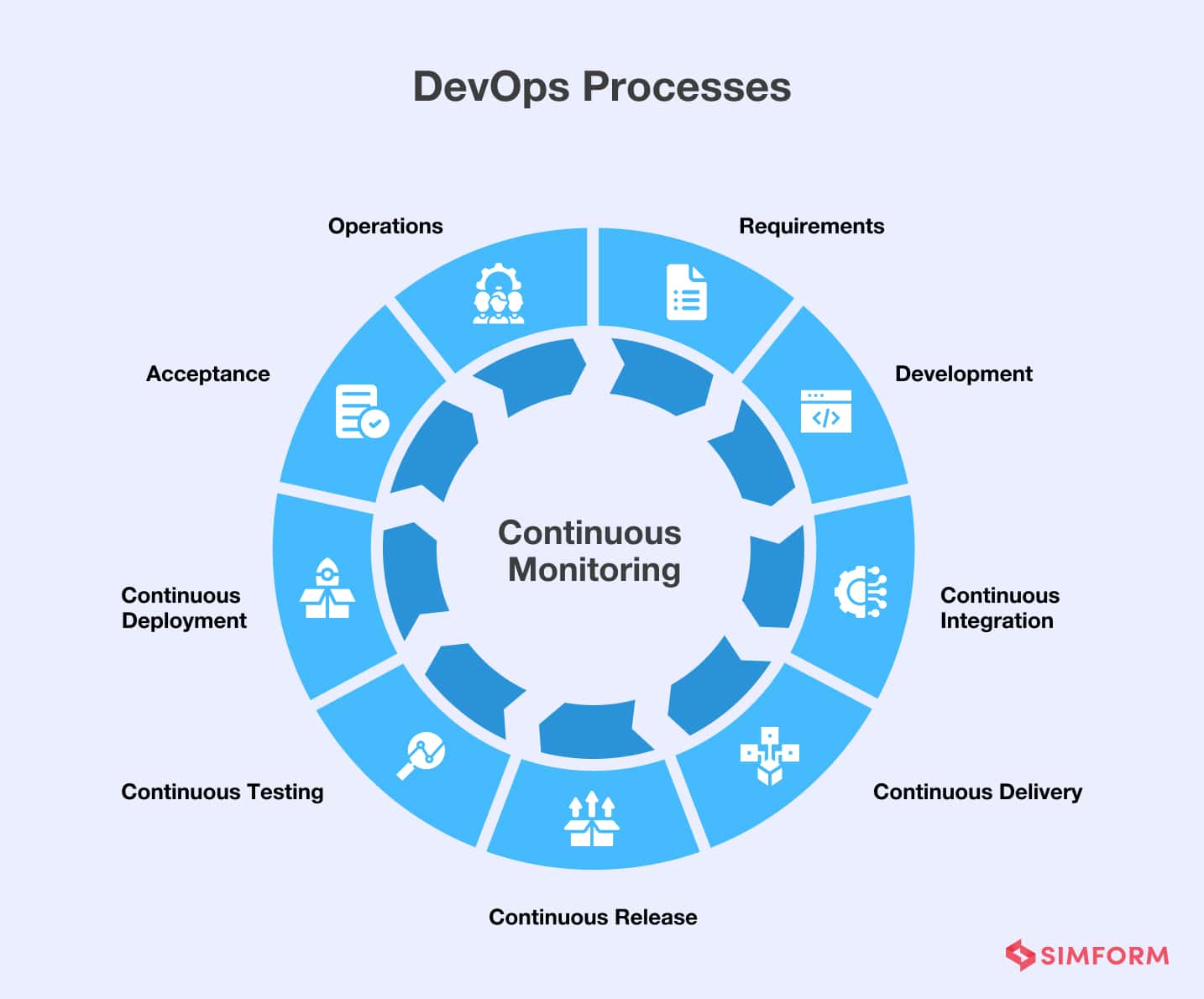 The following are various phases of the process to bridge the communication and alignment gap between traditionally siloed teams.

Continuous integration is a primary DevOps practice where developers consistently merge the changes in their code back to the central repository. And continuous delivery takes up from where continuous integration ends. It automates the delivery of applications to the designated infrastructure environments like testing and development. CI/CD automation enables organizations to respond to evolving needs of consumers and ensure the quality of application updates.

Product managers at Spotify’s Technology Infrastructure Group work diligently to build tools and establish best practices for automating processes and make Spotify a true DevOps company. They created Tingle with a vision to provide a common CI/CD experience for all types of jobs; help teams set up new projects quickly without bothering about pipeline configuration knowledge. The tool serves as their centralized CI/CD system for data, backend, and web services. It also aids in reducing the time from set-up to the first build and deployment from 14 days to 5 minutes.

Speaking again of DevOps poster child – Netflix, we can say that it developed a DevOps culture organically. Netflix invented a tool ‘Chaos Monkey,’ in 2011 to test the resilience of its IT infrastructure. It intentionally disables computers in Netflix’s production network to test how the remaining systems respond to the outage.

Continuous deployment — the final phase of the pipeline — is about automatically launching and distributing the software artifact to end-users through scripts or tools.

Amazon is quite renowned for impressive DevOps. It transitioned to DevOps in 2010 as a part of its move from physical servers to AWS cloud. Amazon also started using a continuous deployment process managed by an internal system called Apollo. It enables developers to deploy code whenever they wish to and on whatever servers they want to. By 2011, Amazon was deploying new software an average of every 11.6 seconds to production servers.

Microservices is a comparatively new trend in the software industry and is tailor-made for DevOps. In this architecture, small deployable services that perform specific business logic are modeled around complex applications. So, delivery teams can independently tackle individual services and simplify the development process, testing, and deployment. Main benefit? One service does not crash or impact other parts of an application!

There’s an emerging pattern to use containers to isolate, package, and deploy microservices. With containers, you can package your application’s source code, libraries, configuration files, and dependencies in a single object. Multiple containers are deployed as container clusters to deploy more extensive applications. Container orchestrators like Kubernetes are used to control and manage these clusters.

Netflix has also implemented containerization in its endless pursuit for scalability. It has developed its own container management tool, Titus, to handle its unique requirements and streamline this process further. This tool powers critical aspects of the streaming giant’s business such as video streaming, content-encoding, recommendations, machine learning, studio technology, big data, internal engineering tools, and other workloads.

Check out Serverless vs Containers comparison and determine which one is more suitable for your application.

The selection of the right tools along with innovative new processes allows you to have customized workflows, build a robust infrastructure, and access controls for smooth functionality. And so, to have smooth integration, you must select the tools depending on their compatibility with your IT environment, your requirements and tech stack, and your choice of cloud provider. 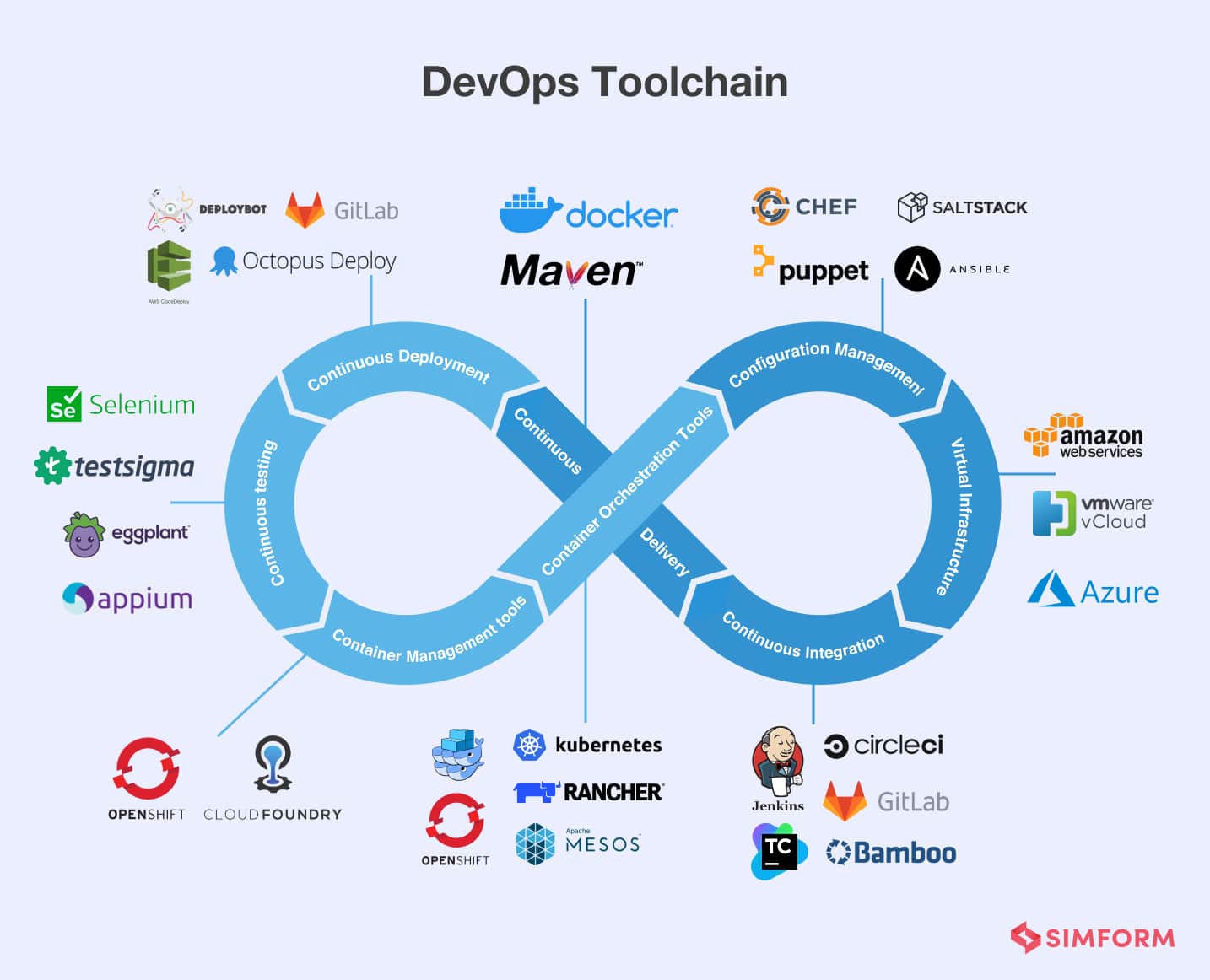 DevOps consultants use various tools for each of the relevant phases of the DevOps process.

Having a DevOps adoption strategy is advantageous for eCommerce companies, too. For instance, Shopify was the first big eCommerce platform to implement DevOps tools in their business. It uses Kubernetes, which has helped Shopify increase the page’s response speed and significantly reduce infrastructure expenses.

DevOps security is the discipline and practice of protecting the entire DevOps environment through technology, policies, processes, and strategies. Companies must embed security throughout the DevOps lifecycle, including inception, design, build, release, test, maintenance, and beyond. Nowadays, this type of DevOps security is called DevSecOp.

With DevOps, batches of code are pushed and modified over pretty short time frames. Often security teams may not keep up with code reviews. And if security parameters like code analysis, configuration checks, vulnerability scanning are not sufficiently automated, the DevOps output might have operational weaknesses. So, what should you do?

The main goals of DevOps implementation are – velocity, quality assurance, and application performance. Teams need to collect, analyze, and measure metrics aligned with the most relevant business goals and KPIs for continuous improvement. These metrics will provide you with the essential data necessary to have visibility and control over your software development pipeline.

Though many metrics help measure DevOps performance, the following are the key metrics every DevOps team should measure.

The other metrics that you should measure are:

A DevOps team has to optimize product delivery and value throughout a product’s lifecycle. For that, your team should consist of people having skills in both software engineering and operations. However, what happens typically is – some team members are experts in writing code while others are better at operating and managing infrastructure.

So, all in all, big organizations mostly have six essential roles in a DevOps team. These roles are – DevOps evangelist, release manager, software developer, QA engineer for manual testing and automated testing, automation architect, and security engineer. 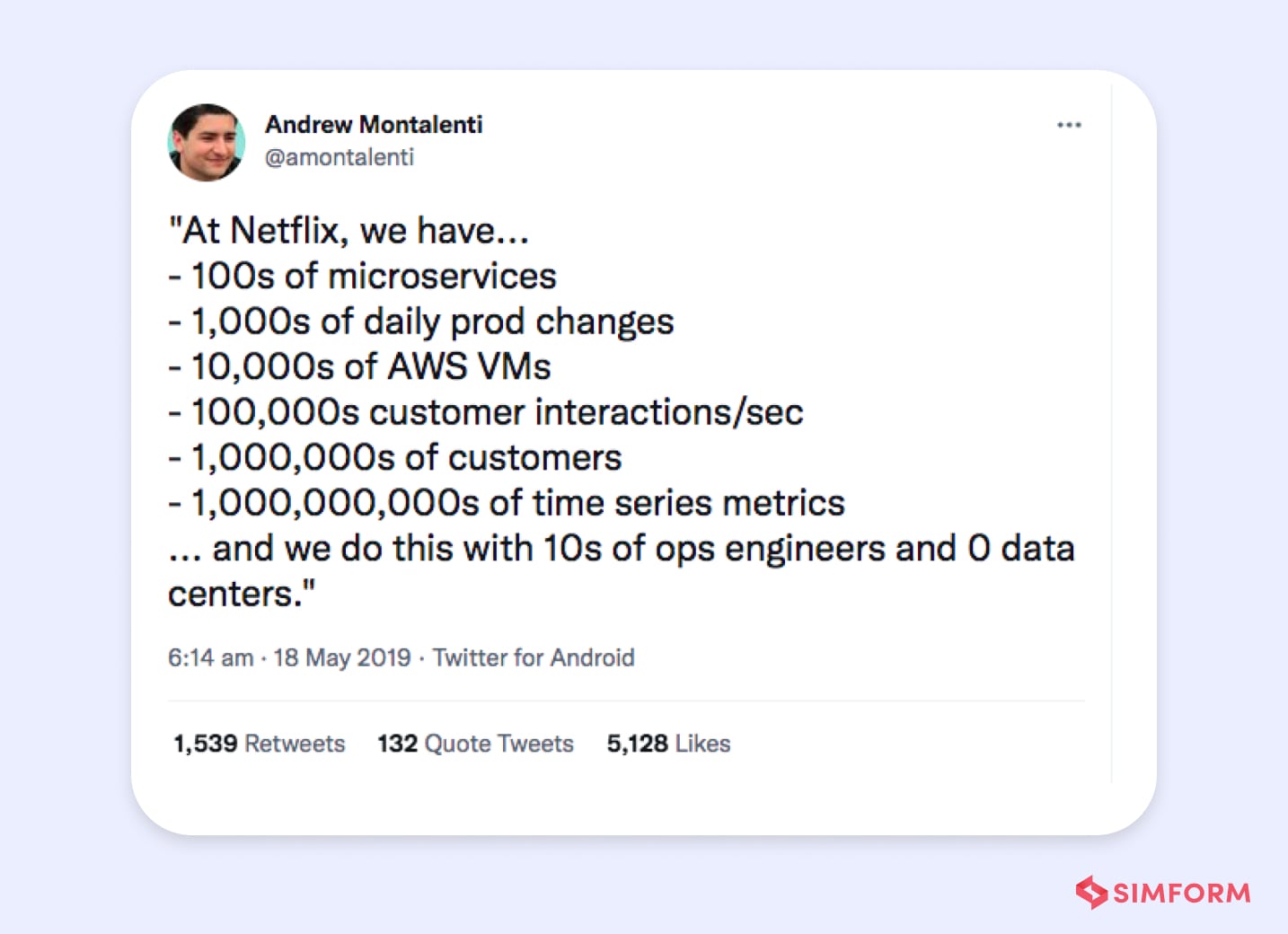 Simform has a diverse development team to ensure the flawless functioning of the DevOps pipeline. From planning what tools to use for implementation to measuring your DevOps progress, Simform’s qualified DevOps team can help you implement a comprehensive DevOps strategy. We also look after efficient management of test environments to deliver substantial cost savings to your organization.

As we know now, CI/CD pipeline is at the heart of DevOps. For example, one of our clients, the International Hockey Federation (FIH), wanted to strengthen its web presence before the Hockey World Cup 2018. Our DevOps team worked with their tech team, established CI/CD processes for quicker releases, and automated the application with Jenkins. And ultimately, we succeeded in launching a fully functioning website on time and ensured zero downtime during new deployments.

Ready for the implementation of DevOps strategy!?

If you are about to commence your journey of implementing the DevOps model, the first thing you must do is assess your current situation and set realistic goals. Naturally, DevOps transformations cannot happen overnight. After all, you cannot tell your teams to start having five releases a day instead of one release a month, can you? 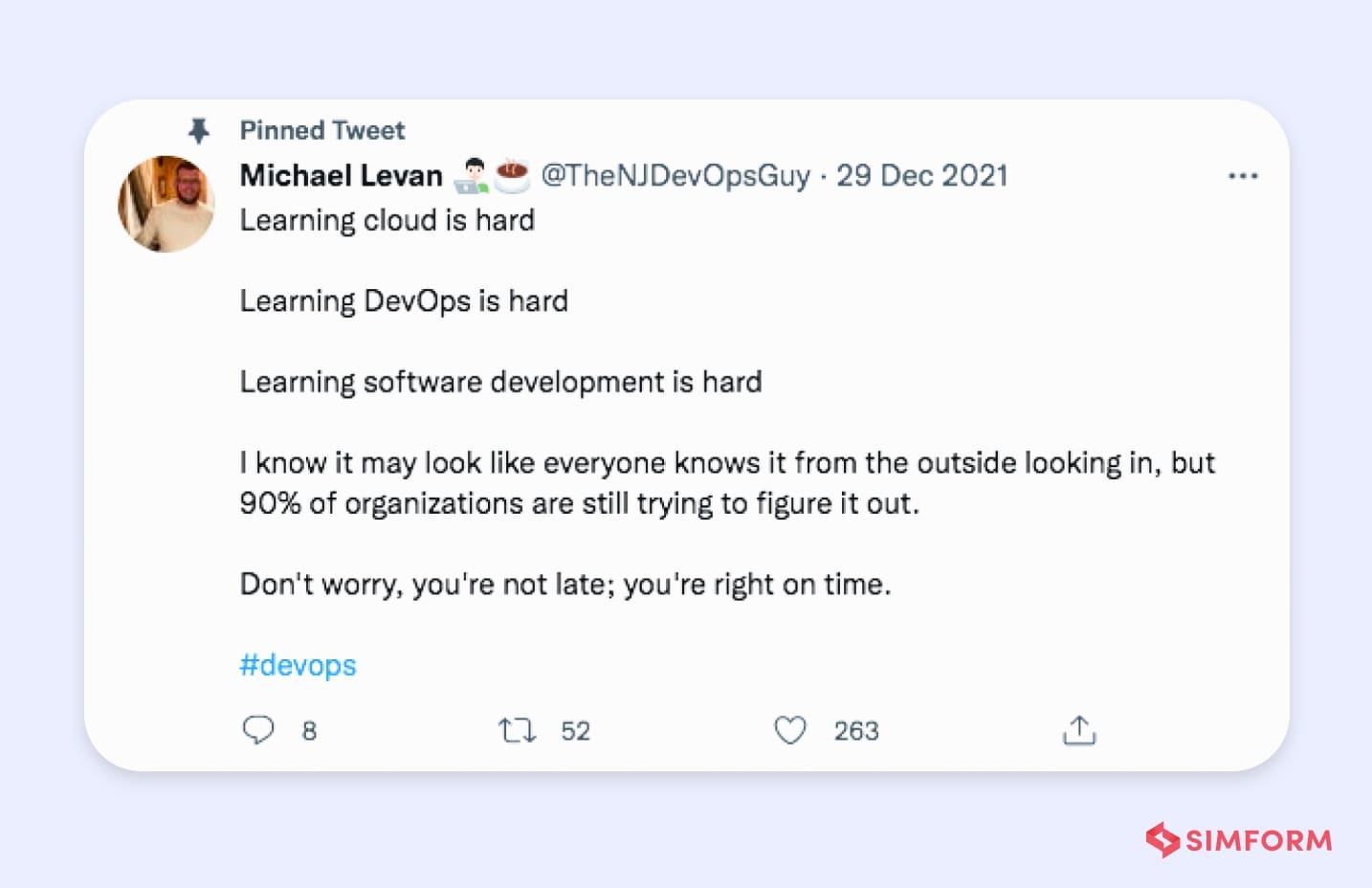 Your organization should have a more structured approach. Everyone aboard will need a lot of education, training, and time, of course, to get used to all the changes. Also, you’ll need a partner who has a team of experts to ensure that you achieve all the benefits of DevOps. So, let us join hands to take your business to the heights that you always aspire to reach! 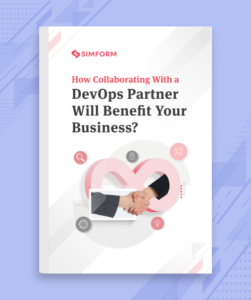 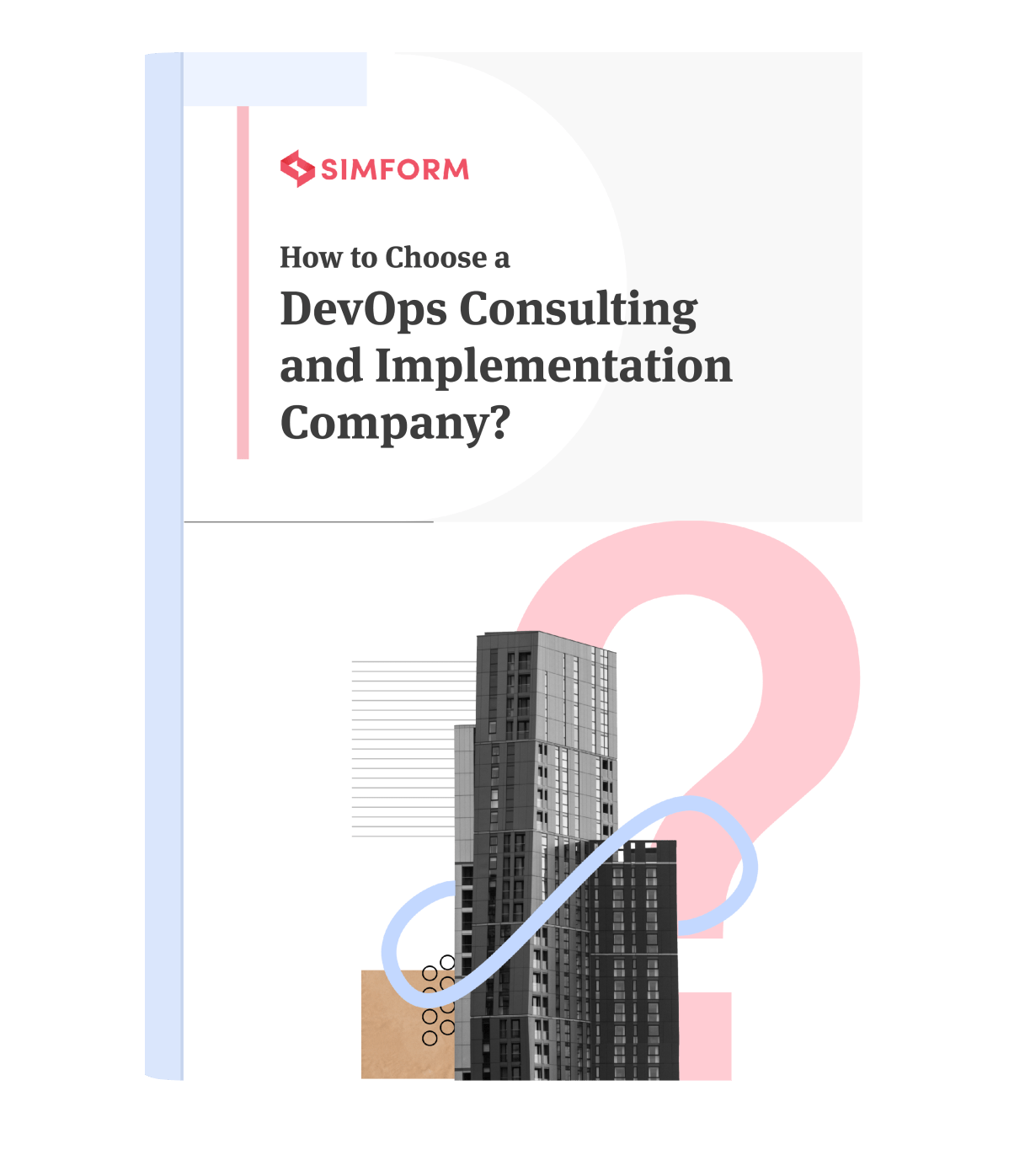