Quick Summary :- Node.js is, undoubtedly, a beloved framework for most software development projects today. However, it has also drastically increased the complexity of hiring the right talent for the job at a reasonable cost. This blog covers the current hiring determinants and key aspects to help you hire eligible Node.js developers without burning a hole in your pocket!

Node.js is fast, lightweight, performant, can be hosted anywhere, and built upon JavaScript.

This explains why Node.js is wildly popular among developers as well as business owners. Since it’s fast and performant, it enables businesses to roll out applications and digital products that excel. Moreover, developers find Node.js appealing because of its event-driven architecture and use of JavaScript throughout.

No wonder you want to have expert Node.js developers working at the backend of your digital product. But the huge demand and rising wages don’t make it easy to source the best talent. It’s why hiring remote Node.js developers is the best strategy to move forward. You get to tap into a much broader and richer talent pool while not having to break the bank at the same time.

There are plenty of variables involved in a custom software development project. Each project comes with a unique set of characteristics and requirements. For instance, the scope and scale of making a payment integration API will be vastly different from developing a chatbot. You’ll have to find developers with relevant experience creating secure applications for the payment API, while a ‘generalist’ might suffice for the chatbot.

1. Scale of the project

And as these measures go up, you need more resources to get the job completed in time. Let’s have a quick look at various types of Node.js applications at multiple scales.

2. Complexity of the project

It’s natural that as the complexity of the project increases, the developer costs would go up. However, if your project requirements consist of the basic features and a simple setup, even the less experienced developers can fit the bill.

On the other hand, if you want the product to have specialized features and complex functionalities, you’ll have to take the help of seasoned coders. Let’s consider application security, for instance. It’s a critical aspect of any business application. So you’ll require not just an experienced Node.js developer but someone with proven experience of working on application security. And since such developers don’t come by so easily, expect to pay higher charges for their services.

You should also keep in mind that complex features often take longer to execute. Therefore, irrespective of the payment model, you’ll have to compensate developers for the increased number of hours for the job.

An MVP or a static web application are a few examples of what can account for a simple project. Here, you only require the essential features, and such projects can be pocket-friendly. On the other hand, an eCommerce application with all its bells and whistles is an example of a complex task. Based on the nature of the products, there’ll be a lot of customization. On top of that, payment integrations, security, delivery integration, etc., instill further complexity to the project.

You might already have the list of skills you want the Node.js developer to possess to be the perfect match for your requirements. However, the varying skill sets naturally have an impact on the cost of hiring remote Node.js developers.

The engagement model refers to the hourly, monthly, or project basis arrangement you have for compensating the development. But, wait! Shouldn’t all these have the same value for a project? In an ideal world, yes. But not so much on the field.

One of the woes associated with hourly and monthly payments is that they often remain untabbed. As a result, it’s very easy for developers to fall into the trap of taking unnecessarily long to wrap up a project to make those extra bucks. On the other hand, efficient and fast developers tend to feel penalized for completing a job well within deadlines under the hourly arrangement.

A project-basis arrangement is a genuinely win-win settlement for developers as well as project owners. A fixed amount for the project saves you from inefficiencies on the developer’s side, while provisions for unseen roadblocks and modified project requirements enable Node.js devs to get fairly compensated.

The project-based engagement model is usually the norm for remote Node.js teams such as Simform. First, we create the roadmap for your project’s entire development life cycle and break it down into major milestones. Then, with compensations fixed around these milestones, the project owners remain in control while remote developers get their hard work’s worth.

Remote Node.js developers come with varied experiences from various regions and even with varying team dynamics. And all these factors dictate the cost of hiring developers. Let’s see how.

1. The rate varies with experience

You’ll always be willing to pay extra to an experienced Node.js developer because of what they bring to the table, especially when you need their specific skill sets. If you’ve already done the necessary homework, you’ll know all about the kind of expertise you need right from the beginning.

Remote Node.js developers can be broadly classified into three categories based on their experience and skill levels.

2. The salaries vary with the location

All the factors we’ve discussed so far are related to project parameters and developers’ skillsets. And it makes complete sense for these factors to affect the cost of hiring. However, one aspect has nothing to do with your project or developer requirements, yet it has the most significant impact on costs. It’s the developer’s location.

Everything varies at the same rate as the developer prices in these regions, from broadband tariffs to rents. In fact, the developer prices vary even within countries based on how expensive some states are to live in. Here’s a quick breakdown of Node.js developer salaries across various regions and countries.

3. The price varies from freelance agents to tech agencies

When you hire remote Node.js developers, they can be either freelance agents or from a tech agency. And before you ask, let me tell you there is no obvious choice between the two. Instead, it all depends on the specific requirements and capabilities of the agency or the developers.

If the development project is such that it requires only a single developer, getting a seasoned developer for the job is a good idea. Again, direct communication will benefit the project, and you can get a reasonable deal for yourself.

However, if the project is such that several Node.js developers need to contribute, going with an agency is always smarter. As the number of developers increases, collaboration can quickly become a headache for you. But if these developers come from the same agency, communication is rarely an issue. The agency would take care of quality and deadlines during production, and you’ll be able to focus on other business aspects.

Additionally, an agency can pivot as per the needs of the project at an instant. Growing too fast? They’ll get you more developers overnight. Need more expertise? They’ll assign a project manager to your project. These capabilities are a boon as they encourage seamless growth and scaling.

Consequently, hiring a remote development agency can be a tad bit costlier than hiring individual freelance agents. But an agency brings you a lot of additional perks that justify the bump in pricing entirely. For example, they’ll take care of everything from recruitment to timely delivery and even maintenance of the software product.
Platforms such as GoodFirms and Clutch are beneficial in locating the best agencies from around the globe. However, the hourly rate to such agencies varies from $25 per hour to $300 per hour.

Simform gives you the best team of remote Node.js developers

Simform is a software development company with more than a decade of experience under the belt. We provide on-demand development teams to organizations from startups to enterprises. We’ve helped Fortune companies build unique digital products from scratch and can help you too.

We have a team of talented and seasoned Node.js developers who can care for all your project requirements. We can be by your side when you are at the drawing board or come in and add excellent new features to your already existing digital product. So, feel free to reach out for a virtual coffee and know how we can assist you in your next Node.js development project. 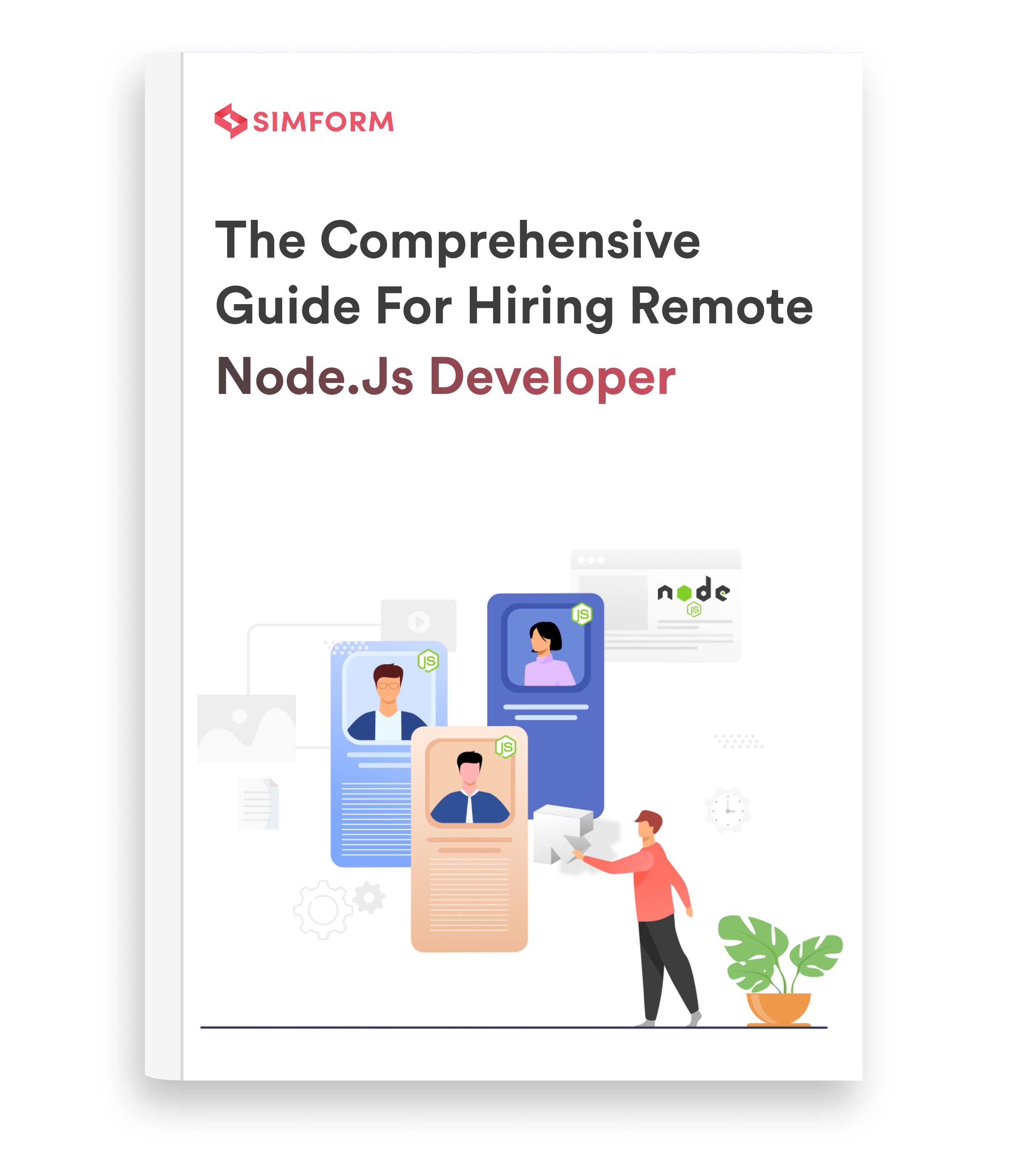 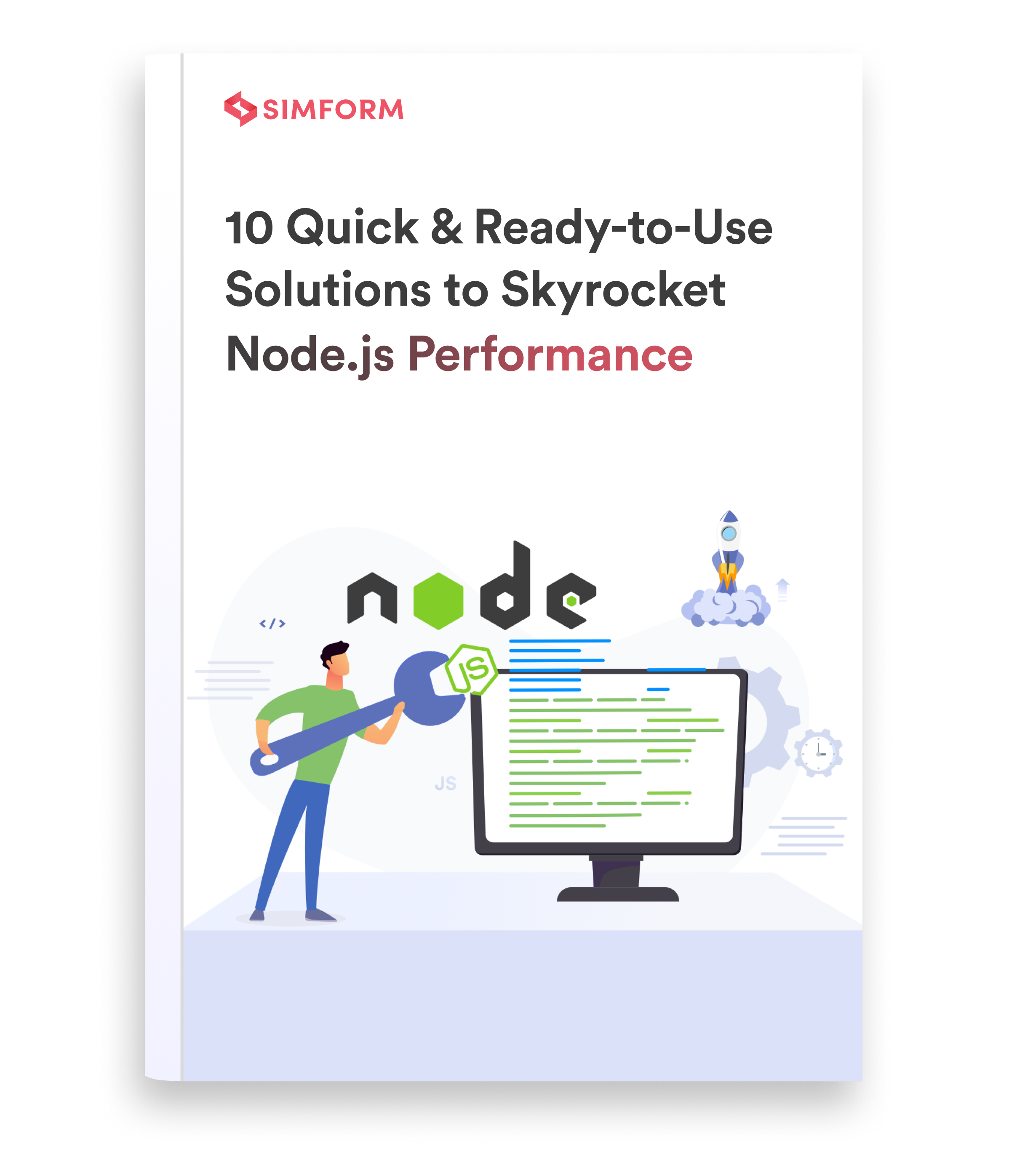 How Much does it Cost to Hire Remote React Native Developers?