A concise guide to different types of software testing along with their advantages.

Quick Summary :- Software testing is an integral part of the development process. This blog gives you a brief idea of different types of functional and non-functional testing, their objectives, and lists down a few of their advantages.

A fully functional software product is like a mirror image of your business’s reputation. That’s why businesses all over the world are on a constant lookout for a testing team to test their applications. Because of these immense need, the global software testing market is predicted to grow at $70 billion by 2030.

But without proper testing, the bugs and errors not only cost you a hefty amount of money but can also tarnish your business reputation. And so, the demand for software testers, QA, and developers is expected to grow at 25% between 2021-2031.

If you are curious to know – what are the different types of testing? How to select the best one for your project? What are the advantages of a specific testing technique? This blog will serve as a guide for you.

Simform provides top-notch testing and QA services carried out by a team of highly skilled engineers with robust testing practices to deliver quality software. Connect with us today to avail our world-class software testing services!

What is functional testing?

Functional testing is carried out to test the software against its functional requirements/specifications. Such tests don’t consider how a process occurs. Instead, it focuses on the intended result of the process. Thus, it answers the most fundamental question “does the application work as intended?”

It has mainly four objectives as follows –

White box testing can be implemented in 3 levels of functional testing: unit testing, integration testing, and system testing. In this technique, the tester is aware of the software’s internal infrastructure and the code. It tests the core aspects of software such as input and output, decision branches, loops, statements, etc.

Software is a combination of different individual parts. Unit testing validates the functions of a specific part or unit. Such type of testing is carried out during the initial phases of software development. This omits the possibility of fixing errors during later stages of STLC, which is sure to incur more time and money.

Unit testing is carried out using the following four techniques.

Similar to unit testing, component testing accesses the individual parts of an application. Therefore, it is also termed Module testing. While the unit testing is carried out by the developer, component/module testing is done by a QA under black-box format. Sometimes QA professionals use a stub and driver to simulate the interaction between components relying on each other.

After the individual models are tested for integration, the crucial system testing comes. Here, all the modules are clubbed together, and the entire system is tested for system failures or errors. The primary purpose is to evaluate end-to-end system specifications. This type of testing is subdivided into 50 different types of tests, but every software testing company uses 3 of the basic tests, namely –

It tests for the integrity of the whole system throughout the development process. Regression testing also ensures that old bugs don’t reappear after adding new software modules.

Here, the tester ensures that there is no missing function within the system.

In this type of testing, the tester checks for the reliability of the system and its ability to successfully recover from possible system crashes.

This is the last phase of a software’s functional testing before it is made available to the end-user. Next, the client tests the system for its acceptability by verifying if the product performs flawlessly in compliance with business requirements and functionality. The final word lies in the client’s hands to decide whether the system is a Go/No-Go before releasing the product into the market.

There are majorly three different types of acceptance testing.

Alpha testing is a subset of acceptance testing carried out by the internal team members. The goal of alpha testing is to detect major bugs in a yet-to-be-stable version of the project.

Here, the application is made available for a selected number of end-users enabling them to provide feedback. Beta testers being end users have no prior knowledge of the application beforehand. This helps get a completely unbiased opinion from a specific set of end-users.

Also termed end-user testing, user acceptance testing determines whether the application works as intended for the end-user. This type of testing explicitly checks the functionalities that are quite often going to be used by an end-user. 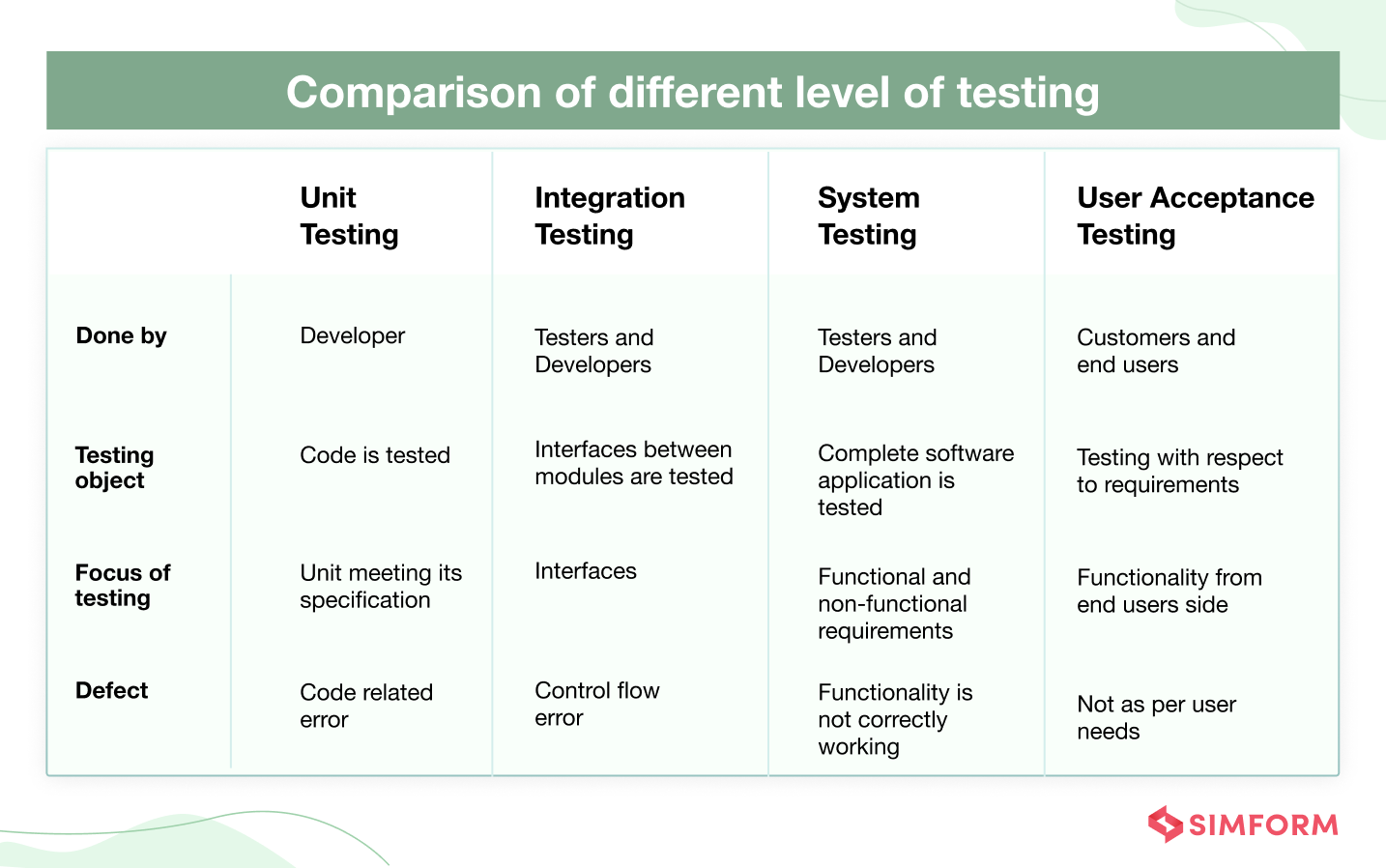 Apart from the 6 major types of functional testing mentioned above, there also exist three different types of testing. These tests are performed from time to time to check the software’s reliability, performance, and stability. These are –

For testing the communication between two different softwares that takes place via an interface. Performing interface testing ensures software security and its capability to handle network failure.

An end-to-end software testing technique performed to assess the core functionalities of the software. Performing it helps you detect 80% of bugs during the early stages of STLC and also assists you in faster troubleshooting of regression bugs.

Performed to check any functional issues of the software as a whole after the introduction of new features/changes. Performing sanity testing will help you identify missing dependent objects.

What is non-functional testing?

Volume testing ensures that the application responds as intended in scenarios where it has to deal with high volumes of data. Typically when dealing with massive data sets, it impacts the system’s performance. Volume testing ensures that the system impact is within a tolerable limit as per testing standards. Thus, it can act as a benchmark to calculate the current system’s scalability.

When the software is developed for global use, a localization test is performed as one of the non-functional tests. The purpose of localization testing is to test the linguistic and regional aspects of the application in accordance with the particular geographic location. This is to test if the software is customized as per the targeted country. The testing process is thoroughly checked against parameters such as local language, currency, date format, etc. Content and UI are the two major areas that are affected by localization testing.

Performance testing consists of a series of tests to check whether the software is performing optimally. It is classified as a non-functional testing type as it deals with performance testing of the whole application rather than focussing on flagging the functional errors. It is a crucial test as it can improve traffic retention by fine-tuning the app’s performance. There can be a multitude of testing types under the domain of performance. However, let’s have a look at the five commonly used types.

In this type of testing, the QA induces an expected load on the application and analyzes its performance. Load testing gives a generic idea of an application’s behavior under normal conditions, latency, and throughput.

To check the system’s reliability, the system is subjected to more than the expected workload in stress testing. By doing so, you will get a clear idea about the difference between its intended usage limits and design limits.

Unlike load and stress testing, where the workload is gradually increased, the system is tested under a burst of load in spike testing. It analyzes how the system will function under sudden traffic spikes.

Soak testing is elongated load testing, where the application is analyzed for long-term effects like – memory leaks, storage problems, etc. The duration of soak testing can last up to several hours.

What’s the use of customer-centric software if it’s too complex to use? Usability testing is conducted precisely to address this issue. The application’s ease of use is tested from the end user’s perspective in this testing method. In addition to that, usability testing helps test the design aesthetics and various workflow processes of the software.

It is a unique type of non-functional testing. As the name suggests, this type of testing is done by assuming a monkey is using the application. Here the tester inputs random input and values and ensures that the application doesn’t get crashed from random inputs. As randomness is the key element to this type of testing, no specific test case is prepared for this test.

When the application is running on the server for the end user’s use, the system can be subjected to all sorts of vulnerabilities like virus attacks, malware threats, phishing, data sniffing, etc. Security testing is conducted to identify the potential threats to the application and gauge the overall risk. This analysis will then help security experts take the necessary measures to keep the hackers and data phishers at bay. Security testing can be further classified into four different types of testing as follows –

It is associated with identifying the known loopholes and vulnerabilities of the application.

A type of testing where QAs stimulate a real-time cyber attack on the system under normal conditions.

Risk assessment simply means identifying all the software risks and classifying them as high, medium, or low based on their risk factor.

Also referred sometimes as security review, it is a structured process of reviewing the entire application in accordance with defined testing standards.

So the software is ready for your business, and it delivers all the functionality as per your needs. But how reliable is the software in the real-life scenario? What are the chances of it failing? To address these important questions, reliability testing is performed. Under this type of testing, the QA ensures that the software performs optimally for a set time duration under normal load conditions. In addition to that, reliability testing reduces the post-deployment cost by identifying repeating failures.

It is used to measure how the software will work in different environments. This test checks for compatibility with other browsers, operating systems, platforms, or screen resolutions. The business goal of compatibility testing is to ensure that the software is supported across all the environments that the targeted users might be using.

What if, in the near future, you decide to move the server solution? The reason could be anything from server upgrade to scalability or reliability of the server. This type of testing determines the degree of feasibility in porting from one server to another. Therefore, it is crucial to conduct this non-functional testing to make sure your application is future-proof.

Testing is like a tool. How to utilize the tool depends on the master using it. That’s why managers and CTOs must understand the different types of testing. This blog has included all the major testing types and categories commonly used by IT professionals. Which one from the above testing techniques did you find the most interesting? Do let us know in the comments below. 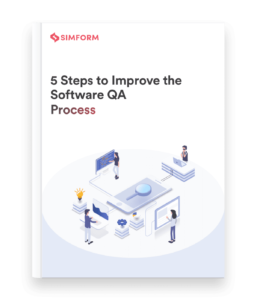 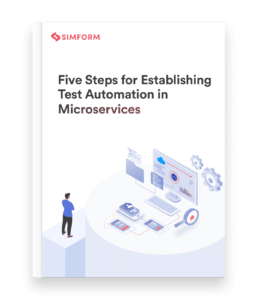 What is Integration Testing? Definition, Tools, and Examples